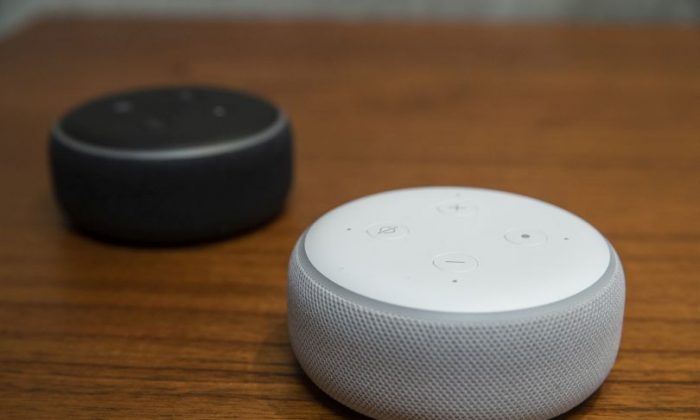 A 6-year-old boy was apparently caught using Alexa to cheat on his homework.

New Jersey mom Yerelyn Cueva, 24, tweeted a video of her son, Jariel, who was supposed to be doing his math homework without any help. “Should I whoop him now or later,” she asked jokingly.

Lmfao should i whoop him now or later pic.twitter.com/mZEJsWWn4W

“Alexa, what’s 5 minus 3?” Jariel asks the machine, awaiting its response. “5 minus 3 equals 2,” Alexa responds. The video then shows Cueva going into the room to confront her son.

“It was just any regular day of doing homework,” Cueva told The New York Post. “I’m in the living room, and I overheard him asking Alexa some math problems, and I could not believe it.”

“What you don’t see is after he says, ‘Thank you, Alexa, for helping me with my homework,’” she added, saying the boy likes doing math but was being “lazy.”

“The funny thing is that math is actually his favorite subject,” Cueva added to the paper. “I was surprised because he knows this stuff. He was just being lazy. Taking a shortcut.”

Merry Christmas from me & the young legend himself ❤️ pic.twitter.com/JulUov4Ssi

A few weeks ago, reports about a U.K. grey parrot that ordered Amazon items via Alexa went viral.

The Times reported that Rocco apparently learned how to use the Amazon smart speaker device to order fruit such as watermelon and strawberries. The animal also attempted to order ice cream, a kite, and light bulbs.

Sanctuary worker Marion Wischnewski said she has to check her account every day to see if the parrot, an African grey, has ordered something.

“I have to check the shopping list when I come in from work and cancel all the items he’s ordered,” Wischnewski was quoted by the Daily Mail as saying. “[Alexa and the parrot] chat away to each other all day. Often I come in and there’s music playing,” Wischnewski told the publication.

A parrot is using an Alexa device to order things from Amazon https://t.co/A7KMm5Vqlm

“He knows the telephone and can make different mobile ringtones,” Wischnewski told the Times. “He can do the microwave or the squeaking door on my fridge. He can do the ice cream van in the summer, and a truck reversing so loud you think it’s in your living room.”

When it was kicked out, the parrot created “a few issues initially in the office, by swearing regularly and throwing his water bowl around,” CNET reported.

CNET reported that Rocco has also “fallen in love” with the Alexa device owned by Wischnewski.

In a recent Reuters report, a customer was shocked last year when Alexa blurted out: “Kill your foster parents.”

Alexa has also chatted with users about sexuality, and the device also made comments on dog excrement. And this summer, a hack Amazon traced back to China may have exposed some customers’ data, according to five people familiar with the events.

The episodes, previously unreported, arise from Amazon’s strategy to make Alexa a better communicator. New research is helping Alexa mimic human banter and talk about almost anything it finds on the internet.

“Many of our AI dreams are inspired by science fiction,” said Rohit Prasad, Amazon’s vice president and head scientist of Alexa Artificial Intelligence (AI), during a talk last month in Las Vegas.