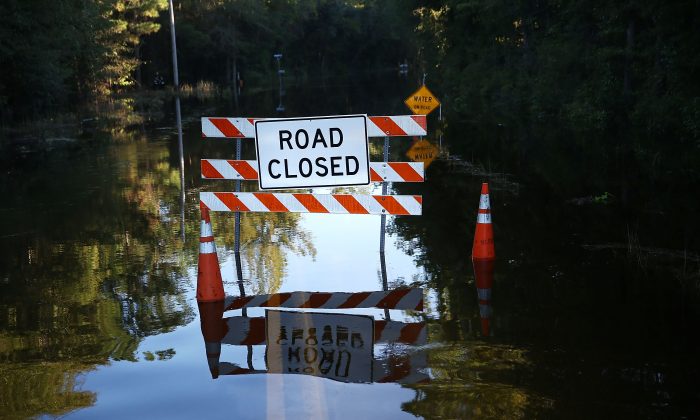 A road closed sign is seen on a flooded road as water that breached dams upstream reach areas in the eastern part of the state on October 8, 2015 in Givhans South Carolina. (Joe Raedle/Getty Images)
US

6 Workers Injured in Explosion at Dam in Washington State

SEATTLE—An explosion at a hydroelectric dam on Washington’s Columbia River injured six workers, but it did not compromise the dam’s structure and posed no risk to the public, officials said.

The utility workers were hurt in an electrical explosion at about 4:15 p.m. Thursday at the Priest Rapids Dam near the central Washington city of Mattawa, Grant Public Utility District spokesman Thomas Stredwick said.

“The stability of the dam was never compromised,” Grant County Sheriff’s Office spokesman Kyle Foreman said. “There’s no reason for people living around the dam to be worried.”

Three of the six injured arrived at Harborview Medical Center in Seattle Thursday night for burn treatment, according to spokeswoman Susan Gregg. Two men, both in their 40s, were in critical condition and in an intensive care unit. A 58-year-old man was in satisfactory condition, she said.

Stredwick said he didn’t know where the sixth person injured was taken for medical treatment.

There was no immediate word on what caused the blast but Foreman said they’ve found no connection to terrorism or criminal activity.

Some residents in the rural, largely agricultural area were without electrical power Thursday evening and cellphone service related to the blast, Stredwick said. He said 911 call service may also have been out briefly.

Multiple agencies responded to the incident.

The Priest Rapids Dam was built in the 1950s and is one of two operated by the Grant Public Utility District along the Columbia River to provide power to residents.