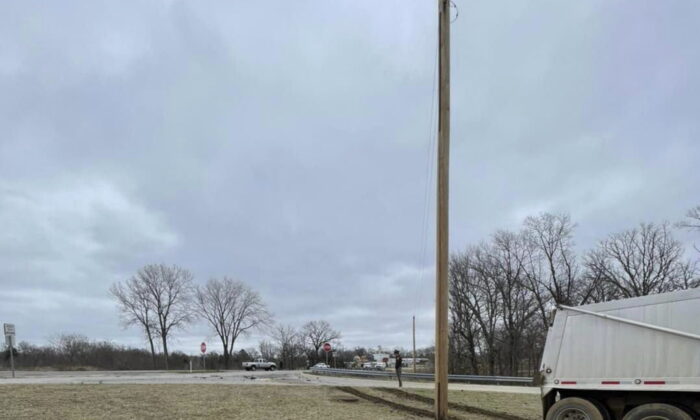 The scene of a deadly two-vehicle collision in Tishomingo, Okla., on March 22, 2022. (Johnston County Oklahoma Sheriff's Office via AP)
Crime and Incidents

6 Victims Killed in Oklahoma Crash Were in Car That Seats 4; Most Weren’t Wearing Seatbelts: Officials

Officials in Oklahoma said that six teenagers who were killed in a crash this week were in a car that only seats four and most weren’t wearing seatbelts.

The high schoolers were on their lunch break when their 2015 Chevrolet Spark was involved a collision with a semi-truck, said Oklahoma Highway Patrol spokesperson Sarah Stewart to USA Today.

The 16-year-old driver and front-seat passenger were wearing seat belts when the crash occurred, said the Highway Patrol in a statement. The highway patrol added that the vehicle can only seat four people.

“The unbelted people put everyone at risk,” said William Van Tassel with automotive group AAA. “In a crash, the unbuckled people fly around all over the place,” injuring others inside the vehicle.

“I can’t even begin to express the heartbreak I know many families are feeling right now,” Madison’s aunt, Falesha Roberts, wrote on Facebook.

Sadie Machado, who identified herself as Gracie’s sister, posted a photo of the two hugging each other. “My best friend,” Sadie wrote in a Facebook post.

“Brooklyn was an amazing kid, she loved her family and friends wholeheartedly,” read a tribute on a GoFundMe campaign for the Triplett family. “She was a loyal friend and one hell of a ball player! She will be missed deeply by our family.”

Natalie Houston, who said she was a relative of Austin Holt’s, asked for prayers on social media.

“She is having a hard time and feels like it’s a joke. I don’t know why these tragic things happen,” she wrote on Facebook.

Tributes were also posted on social media for Memory Wilson, who leaves behind a daughter. A family friend described Memory as someone with the “biggest heart of pure gold,” as reported by the Daily Mail, which obtained photos of the victims.

Addison Gratz, referred to as “AJ” by family members online, was remembered on social media by family members. Charles Lewis, her grandfather, posted that with her death, a “large part of me died yesterday,” the Mail reported.

The six victims have not been officially identified by any local agencies.

The Oklahoma Highway Patrol, in a Wednesday statement, said that its traffic unit “is conducting a thorough investigation that could last weeks” and that “any loss of life is tragic and we will continue to thoroughly investigate.”

Officials said the crash occurred shortly at around noon Tuesday in Tishomingo. The victims included the 16-year-old driver, three 15-year-olds, and two 17-year-old passengers, according to officials. The driver was not identified.