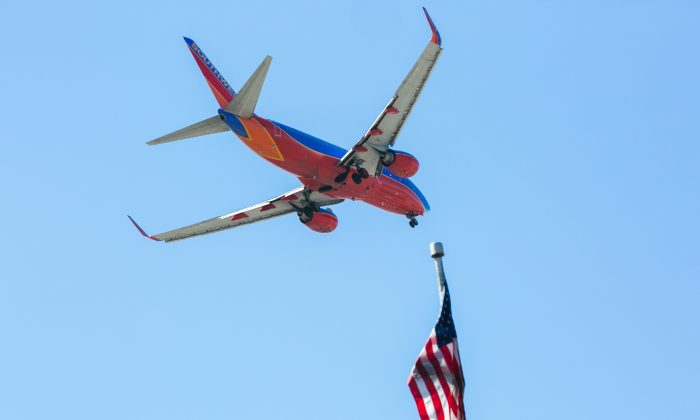 A Southwest Airlines jet flies over an American Flag before landing at the JFK airport in New York City on April 24, 2015. (Benjamin Chasteen/Epoch Times)
US

6 Planes and Helicopters Targeted by Lasers in New York, Dallas

The Federal Aviation Administration says three planes and three helicopters were targeted by people shining lasers at them in both New York and Dallas.

Aviation officials warned that the lasers could blind pilots, leading to a crash.

Virgin America and Southwest Airlines plane, a private plane, two news helicopters and a police helicopter were hit with laser beams on the evening of Nov. 11. In New York, a Channel 4 news chopper flying near the Barclays Center in Brooklyn was hit by a laser at 5:15 p.m., according to CBS New York. The pilot alerted LaGuardia Airport’s air traffic control.

“When we were looking there, we got lasered,” CBS pilot Joe Biermann said. “The NYPD was right next to us, so they hovered above the place.”

Local authorities were able to track down the suspects in Brooklyn, and two people were taken into custody, WCBS reported. A third person was later apprehended in New Jersey.

Helicopter pilots with CBS New York, WNBC and WABC each said they saw a laser in the cockpit while flying near Park Slope, Brooklyn.

At Love Field in Dallas, three planes reported getting hit by a laser as they flew between 3,000 and 4,000 feet in altitude, the FAA said. Nobody was arrested and there was no harm to the planes during the incidents between 7:30 p.m. and 7:45 p.m., according to the Dallas Morning News.

According to the FBI, the offense of shining a laser at an aircraft is a crime punishable by up to 20 years in prison and a $250,000 fine. In 2014, the agency announced it would pay as much as $10,000 leading to the arrest of anyone who shines a laser at a aircraft.

During one night in July, 12 flight crews reported getting hit by laser beams over the area.