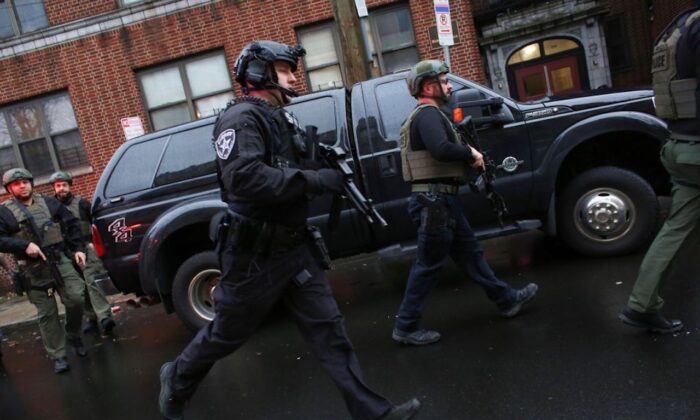 Police officers arrive to the scene where active shooting is happening in Jersey City. One officer was shot when two gunmen with a long rifle opened fire. Two suspects were barricaded in a convenience store, according to officials on Dec. 10, 2019. (Photo by Kena Betancur/AFP via Getty Images)
US News

A police officer and five other people were shot and killed following a wild shootout and standoff in Jersey City, New Jersey, according to news reports on Tuesday, Dec 10.

Officials said the incident began at a cemetery at around noon, possibly related to a drug deal that went awry, ABC7 reported.

A male and a female suspect dressed in black fled to the JC Kosher Supermarket on Martin Luther King Drive before they kept firing at officers, authorities said.

Police then took up defensive positions before SWAT units, the ATF, and other law enforcement agents arrived.

The two suspects were among those who were killed, ABC7 reported. A police robot went into the store and found the bodies of two suspects and three civilians.

The slain officer was a married father of five, NBC News reported.

All schools in Jersey City, which faces Manhattan across the Hudson River, were placed on lockdown, according to local media. The mayor wrote on Twitter that students were expected to be released from affected schools by late afternoon.

#FBI is on scene in Jersey City. The public is asked to stay away from the area of MLK Drive near the light rail station as well as Bay View cemetery. Your cooperation is appreciated.

Two other wounded officers were being treated at the Jersey City Medical Center, the mayor wrote on Twitter.

“Our thoughts and prayers are with the men and women of the Jersey City Police Department, especially with the officers shot during this standoff, and with the residents and schoolchildren currently under lockdown,” New Jersey Governor Phil Murphy said in a statement. “I have every confidence in our law enforcement professionals to ensure the safety of the community and resolve this situation. Today reminds us of their bravery and the sacrifices they, and their families, make for our communities.”

President Donald Trump said he had been briefed on the incident.

“Just received a briefing on the horrific shootout that took place in Jersey City, NJ. Our thoughts & prayers are w/ the victims & their families during this very difficult & tragic time. We will continue to monitor the situation as we assist local & state officials on the ground,” he wrote on Twitter.

“The NYPD is closely monitoring the ongoing situation in Jersey City, and we stand ready to assist in any way we can,” he said, ABC7 reported. “Please keep our neighbors in Jersey City in your thoughts today, especially the brave officers and first responders going into harm’s way to protect lives.”