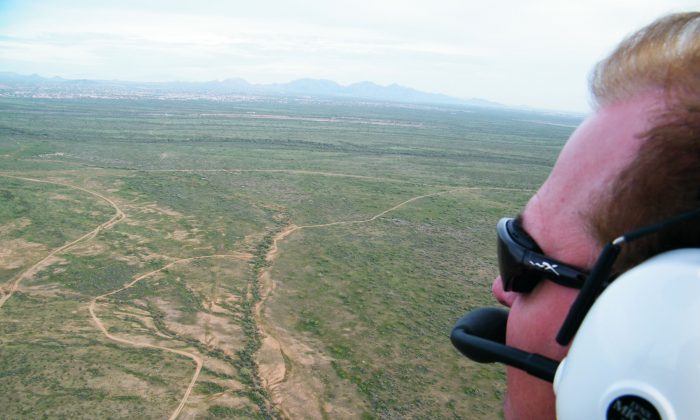 This March 12, 2009 photo provided by Arizona Powerchutes shows instructor Randy Long flying over the Sonoran Desert while powerchuting, in Phoenix, Ariz. Picture a dune buggy with a massive parachute attached to the back of it, sort of a cross between something the Wright Brothers might have designed and that flying machine from the Mad Max movies. Powerchuting provides a flying experience unlike any other. (AP Photo/Arizona Powerchutes)
News

6 of the Most Bizarre Things to See in Phoenix

Arizona’s capital city is not your average town. Named after the beautiful and mythical bird of the same title, Phoenix offers more than its share of intriguing tourist attractions. Here are six of them.

In 1879, several hundred Mormons decided to establish a new settlement. The group headed for Montezuma Creek with 83 wagons and over 1,000 livestock in tow. Before they reached their destination, however, they became stuck near a crevice in a canyon rim. Using pick axes and shovels, the group chipped their way through what later became known as Hole-in-the-Rock. The rock formation still stands today in Phoenix’s Papago Park, a tribute to the hard work and determination of this group of settlers.

At the foothills of South Mountain Park sits Mystery Castle, a unique architectural work that took its creator, Boyce Gulley, almost two decades to complete. The mansion, made of recycled shovels, auto parts, and other odds and ends, is held together with mortar and a surprise ingredient – goat’s milk. Gulley built the hodgepodge house for his daughter, Mary Lou. Today, the city presents the daffy dwelling as an Arizona Point of Pride.

The Phoenix Bat Cave is not really a cave; rather, it is a county flood control ditch that is particularly hospitable to bats. Tourists visit the Phoenix Bat Cave at dusk and wait – quietly and patiently – for the colonies of Western pipstrille and Mexican free-tailed bats to make their nightly exit. Some say the bat-viewing excursion is a boring one, while others claim it is one of nature’s greatest thrills.

Sculptor Robert John Miley fused together 8,000 pounds of metal and steel weapons and laid them at the foot of a happy-looking figurine along Central Avenue and East Roosevelt St. It took him 10 years to collect enough weapons for the project; each piece was confiscated after an act of violence in the town. Art lovers and peace enthusiasts alike revel in the magnificent symbolism of this work.

Although you aren’t likely to see aliens in Phoenix, you can have fun touring the areas where people say they’ve been. In 1997, a UFO sighting was corroborated by hundreds of city dwellers, some of whom produced photographic evidence. The locations where the UFO supposedly visited include Camelback Mountain, Squawpeak Mountain, the state capital, Phoenix Sky Harbor International Airport, and the suburb of Glendale.

History. Wildlife. Art. Aliens. Whatever brings you to Phoenix, you’re sure to have a wonderful time soaking in the unique, and sometimes bizarre, character of Arizona’s capital city.