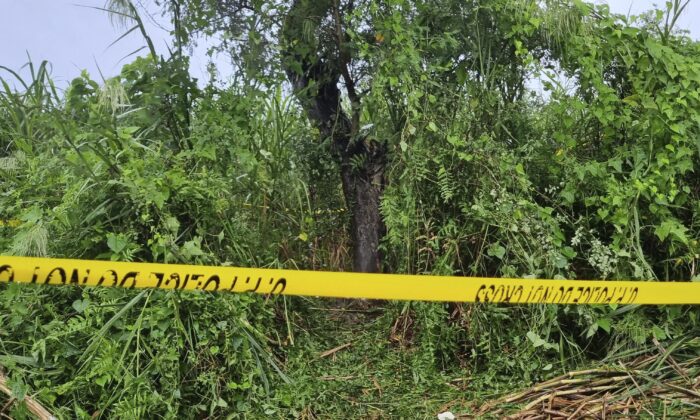 A crime scene tape cordons off a tree, where the bodies of two teenage girls were found hanging after they were allegedly raped, in Lakhimpur Kheri district of Uttar Pradesh state in India, on Sept. 15, 2022. (AP Photo)
India

LUCKNOW, India—Six men were arrested Thursday in the northern Indian state of Uttar Pradesh for allegedly raping and killing two teenage girls whose bodies were found hanging from a tree a day earlier.

The 15- and 17-year-old girls were found hanging from a tree in a sugarcane field near their house in Lakhimpur Kheri district, police said.

According to an initial investigation, the sisters reportedly left their home on Wednesday and met with two of the arrested men with whom they may have had a relationship, police superintendent Sanjiv Suman said.

The two men confessed to strangling the sisters after raping them, and then called two others to help get rid of the bodies, he said. They later hung the bodies from a tree in an attempt to pass their deaths off as suicides, Suman said. Two other men were also arrested in connection with the incident, but police did not say what they are suspected of doing.

Police brought complaints of suspected murder, assault, rape, and rape of a minor. A postmortem examination has been carried out at a hospital and the bodies have been handed over to the family for last rites, senior police officer Prashant Kumar said.

On Wednesday night, the victims’ mother went to the police station, where she said three unidentified men and a male neighbor abducted her daughters, the Press Trust of India news agency reported.

The incident sparked anger in the village, and residents held a demonstration after the bodies were found. Police have been deployed across the village to maintain law and order, local media reports said.

Reports of rape are hauntingly familiar in India. In 2020, the gang rape and death of a woman triggered anger across the country with protesters rallying in the streets. It followed a month after a 13-year-old girl was raped and killed in Uttar Pradesh.

Rape and sexual violence has been under the spotlight since the 2012 gang rape and brutal killing of a 23-year-old student on a New Delhi bus. The attack galvanized massive protests and inspired lawmakers to order the creation of fast-track courts dedicated to rape cases and stiffer penalties for those convicted of the crime.