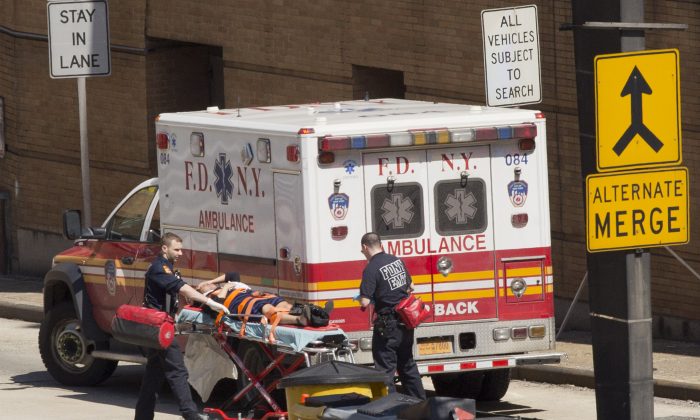 An injured person is carried on a stretcher to an ambulance at the entrance to the Lincoln Tunnel, Wednesday, June 10, 2015 in New York. (AP Photo/Mark Lennihan)
US

NORTH LITTLE ROCK, Ark.—A charter bus ran off Interstate 40 and hit a bridge abutment on a foggy night in Arkansas, killing as many as six people and injuring many others who were taken from the scene in ambulances.

Arkansas State Police said the crash occurred about 1 a.m. Friday. A heavy storm had recently passed through the area and left light rain and fog in its wake, but it wasn’t immediately known if weather played a role.

Troopers said they received reports about a single-vehicle crash around 1 a.m. They diverted traffic to city streets through North Little Rock but were able to open one of the four westbound lanes by 3 a.m. Traffic was snarled for hours but all debris and the bus were towed away before daybreak.

The University of Arkansas for Medical Sciences said it received three patients at its hospital. Two were treated and released and a third was admitted to the hospital in fair condition, UAMS said.

Television station KTHV said on its Twitter feed Friday morning that the passengers were on a business trip. The station posted a photo showing a white bus with “Continental” in broad letters on the side being towed from the scene, its roof partially crumpled. Another photograph showed people standing outside the bus beneath white blankets.

The accident occurred along westbound Interstate 40 near its intersection with U.S. 67-167. The interchange is a bit tricky, requiring drivers to change lanes if they want to follow the route numbers that brought them into the area. They have about a minute to chart a course and execute it.