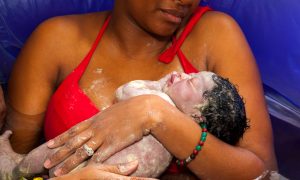 At least six people were wounded when a person in a vehicle opened fire on a large crowd in East Garfield Park, Chicago.

According to the Chicago Sun-Times, five of the six people who were injured were women. They were standing on the street at around 2:47 a.m. on Aug. 11 on the 3500 block of West Lake Street when someone in a sedan opened fire, police said.

The victims were between 27 and 38 years of age, police told CBS Chicago.

A 25-year-old man was shot in the back and was taken to Mount Sinai Hospital in critical condition, the Sun-Times reported.

The two other women were admitted to Stroger Hospital. The women, aged 37 and 38, were in stable condition. One was shot in the arm, and the other was shot in the shoulder, according to the paper.

Before the drive-by shooting, the crowd was playing music.

A woman told the Sun-Times that she heard the shots, saw people running, and heard people yell, “They shootin’.”

It’s not clear why the victims were gathered outside at that time.

No suspects have been arrested, and there is no motive established in the case.

Other details in the case are not clear.

In another report from CBS Chicago, two people were killed and 38 were wounded across shootings in Chicago from Friday evening until early Sunday morning. The figure includes the victims who were injured in the East Garfield Park shooting.

Last week, a shooting near a playground in Chicago left at least seven people injured.

The people gathered at 1:20 a.m. as they stood in the park on the 2900 West Roosevelt Road when a person opened fire from a black Chevy Camaro, said Chicago Police.

According to NBC Chicago, a 21-year-old male was shot in the groin before he was taken to Mount Sinai Hospital in critical condition.

A 25-year-old woman was hit in the arm, torso, and leg, and she was taken to Mount Sinai, police told the local station.

A 22-year-old was also shot and was rushed to the hospital, and she is in stable condition, officials said.

Seven people were wounded in a shooting Sunday as they gathered near a Chicago playground: https://t.co/KLiVNRoZiK

Police added that a 20-year-old man and a 19-year-old woman were taken to Stroger Hospital.

A 23-year-old and a 21-year-old took themselves to Mount Sinai with gunshot wounds, ABC7 reported.

The Chicago Sun-Times reported that no arrests have been made. Detectives are still investigating.