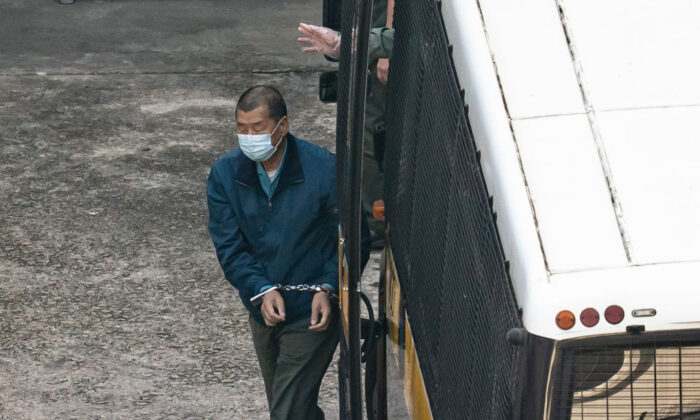 Former Next Media Founder Jimmy Lai Chi-ying and six former Apple Daily executives have been charged with conspiring with others to collude with foreign powers or forces to endanger national security. Six former Apple Daily members except Lai pleaded guilty to the charge at High Court on Nov. 22.

The court has adjourned sentencing per the request of the case prosecutor.

Prosecutor representative Deputy Director of Public Prosecution Anthony Chau Tin-hang, stated that some defendants would be testifying in the upcoming national security law violation trial for Jimmy Lai. Chau asked to delay the six defendants’ sentencing until after Lai’s case had reached a verdict.

The judge granted the prosecutor’s request. It was reported at least three defendants would testify as the prosecution’s witnesses against Lai, including Cheung Kim-hung and Chan Pui-man.

The prosecution mentioned that the defendants held important positions in their previous roles at the now-shut-down Apple Daily. The prosecutors said that some of the accused were members of the Democracy Camp Caucus; these members held meetings with Jimmy Lai Chi-ying, who then discussed and instructed the publication policies of the former news agency.

The prosecutor alleged that three defendants, Chan Pui-man, Law Wai-kwong, Lam Man-chung, and the heads of other news departments, met on Tuesdays for weekly editorial planning to discuss news plans and content of the week ahead.

The prosecutor also said the daily editorial briefing determined the former Apple Daily’s A1 content, in which Chan, Law, and Lam participated. The prosecution said brainstorming sessions were held after each run to review the content.

The prosecutor also claimed that after the Hong Kong government proposed to amend the Fugitive Offenders Ordinance in March 2019, Apple Daily published several “inflammatory” article prints to encourage the public to participate in demonstrations.

After June 9, 2019, a large-scale protest broke out in Hong Kong. The prosecution said Apple Daily published more than 30 “inflammatory” publications during the period, targeting the Chinese Communist Party and the Hong Kong government, encouraging people to continue protesting and advocating the concept of “you burn with us.”

When the pandemic broke out in January 2020, the social movement temporarily subsided.

The prosecution claimed Apple Daily had released various “inflammatory” publications to ” incite” others to protest against the Beijing and Hong Kong governments.

The prosecution listed 153 related articles, including a column written by Jimmy Lai Chi-ying, four commentary articles by Au Ka-lun, three pieces by the late writer Lee Yee, one article by Professor Benny Tai Yiu-ting, and other works from democratic figures and scholars.

Another former Apple Daily columnist, Elmer Yuen Gong-yi, was wanted by the National Security Bureau on suspicion of violating the national security law.

Prosecutor pointed out that the national security police arrested multiple former Apple Daily executives in June 2021. They accused the Former Apple Daily staff of having published several articles to “rationalize and attempt to extend the illegal activities of Apple Daily.”

The articles in question included an exclusive interview conducted by Chan Pui-man and Law Wai-kwong before their arrests. The prosecutor said the report called on its then employees to continue news reporting.

Prosecution: Mention of Toothache to Get Public Sympathy

The prosecutor argued the articles were published to “arouse the public’s support and sympathy for Jimmy Lai,” including documentation of Lai’s bail in February 2021.

The prosecutor suggested the defendants used the article to arouse public sympathy when it mentioned, “Lai suffered from high blood pressure and toothache” and “Lai’s facial expression when waving goodbye to his family in court when he was denied bail.”

Prosecutors continued to allege that Lai instructed the now-closed-down Apple Daily to launch an English edition in May 2020; it announced a campaign called “Apple Daily Free Trial for International Protest supporters” through an article.

The prosecution accused Jimmy Lai of publishing an article headlined “Evil Law Nailed The Coffin Of One Country Two Systems; Pan-dem Camp Continues to Fight For Freedom On Jul 1.”

The prosecution claimed that the Former Apple Daily CEO, Jimmy Lai Chi-ying set up a Twitter account with the handle “@jimmyLaiApple.” The prosecution accused Lai of regularly reposting the content of the Apple Daily English edition and using the social media function “tagging” to interact with “external forces.”

Lai has been accused of interacting with political figures and representatives from the United States, the UK, Japan, and Taiwan.

The six defendants have been charged with conspiring with other persons in Hong Kong to request foreign countries or foreign institutions, organizations, or personnel to impose sanctions, blockades, or take other hostile acts against the Beijing and Hong Kong governments from July 1, 2020, to June 24, 2021.

The Plea Reality in Hong Kong

Many pro-democracy activists were put into jail for over one or two years before they were sentenced. With a guilty plea, they can reduce their sentence by a third. To avoid a lengthy trial and high lawyers’ fees, some of them were forced to plead guilty.

In May, Reporters Without Borders (RSF), the international non-governmental organization, released its 2022 World Press Freedom Index showing Hong Kong ranked at a record low. It had fallen the furthest of any country from 80th place last year to 148th place this year. RSF cited the ongoing crackdown on the pro-democracy media that has targeted the Apple Daily, Stand News, and Citizen News, among other outlets.