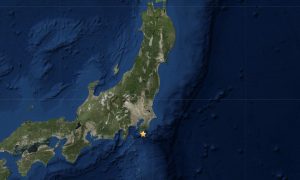 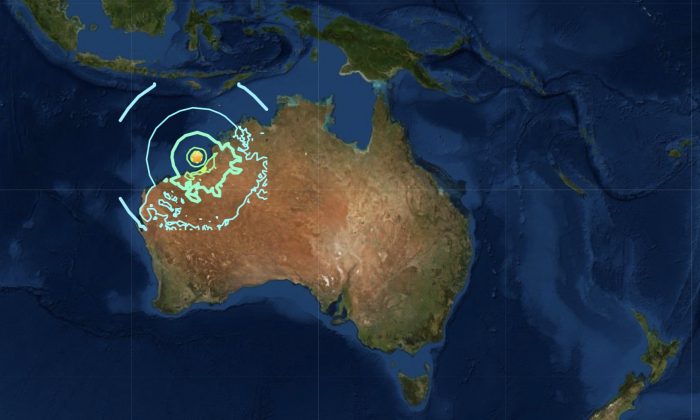 Earthquake near Broome off the coast of Western Australia. (USGS)
Australia

A 6.5 magnitude earthquake has hit off the West Australian coast.

The undersea earthquake occurred at 1:39 p.m. local time on Sunday off the shore between Port Hedland and Broome, in the Indian Ocean, GeoScience Australia reported.

The United States Geological Survey agency said the quake hit at a depth of 33 km, about 203 km offshore. It reported the magnitude at 6.9.

There is no threat of a tsunami to the Australian mainland, islands or territories, the weather bureau states.

Derby resident Jody Gaunt was having a beer with friends when they felt the quake.

“We were sitting outside and our chairs were rocking,” she told AAP.

“The trees stopped moving and the breeze stopped blowing.

“We were thinking, ‘Is this real or not real?’ We’ve never had an earthquake up here, or a tremor.”

Gaunt, 53, said the quake was the talk of the neighbourhood and it was reported that stock had been shaken off the shelves at the local Woolworths.

“I was outside and I just saw the cars moving. It was a bit scary. You could see them moving. A few things fell off the walls onto the floors,” she said.

“It just went for a few seconds.”

Gary, who works at the Mercure Hotel in Broome, said it started as a little shake before the doors and walls rattled.

“It started off with a shake, it was not too crazy and then it developed into quite a shake,” he told AAP, after experiencing his first earthquake.

“It was quite nerve-racking. We made our way outside. It was not too strong, it almost felt like when you are in a car and the wind is a bit strong, and then it started picking up.”

Got a call from @BroomeSHS here is their first #earthquake. A big one too! 6.5 offshore west of Broome. Wasn’t expecting that! pic.twitter.com/chz1Br2s14

Locals took to social media to report they had felt the earth move.

Deb Hannagan, from Broome, tweeted: “We just had an earthquake in Broome! The whole house was shaking and it went for ages. Never experienced anything like it before—quite amazing!”