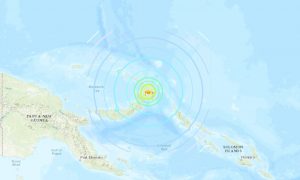 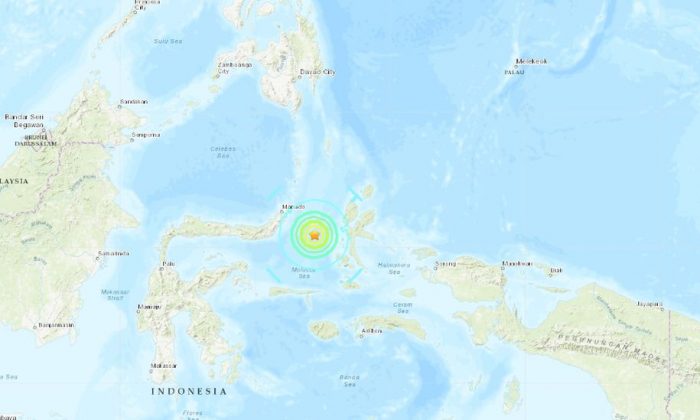 A large earthquake hit Indonesia on July 7, according to reports. (USGS)
Asia & Pacific

A 6.9 magnitude earthquake hit Indonesia on July 7, according to the U.S. Geological Survey.

A tsunami warning was issued after the tremor struck in the Molucca Sea between the islands Sulawesi and North Maluku at a depth of 10 kilometers (6 miles), Indonesia’s geophysics agency said, as reported by The Independent.

The U.S. Geological Survey said that the quake registered at 6.9 on the Richter scale.

A surge of nearly half a meter (1.6 feet) was predicted for the nearest coastlines, the report said.

People have reportedly run to higher ground in Ternate, the largest city in the Indonesian province of North Maluku.

People in Bitung and Ternate, as well as Halmahera and Tidore in North Maluku, were put on standby ahead of a possible tsunami, AFP reported.

The M6.9 in Indonesia has no impact on California. That size quake happens on average every few weeks. One quake triggers others nearby but at distances more than ~3x the length of the fault, we see no signal. A M6.9 affects about 60 miles out.

The Malaysian embassy in Jakarta issued a warning to its citizens.

“Malaysians in the surrounding areas (of North Sulawesi) are advised to take precautionary steps and follow the latest directions from the local authorities,” the embassy said, reported AFP.

JUST IN: Tsunami alert issued after a 7.1-magnitude earthquake off coast of eastern Indonesia https://t.co/2eISfvhv1I pic.twitter.com/xOe4yYjkNk

Meanwhile, high desert communities in Southern California on July 6 assessed the damage and braced for potentially dangerous aftershocks from a major earthquake that shook buildings, ruptured gas lines, and sparked fires near the remote epicenter of the second temblor.

The powerful magnitude 7.1 earthquake rocked the Mojave Desert town of Ridgecrest, south of Death Valley National Park, as darkness fell on July 5, jolting the area with eight times more force than a 6.4 quake that struck the same area 34 hours earlier.

He told a news conference in Ridgecrest on July 6 that he had just gotten off a phone call with U.S. President Donald Trump, seeking a presidential emergency declaration.

“I have full confidence that the president will be forthcoming, in immediate terms, with the formal declaration,” Newsom said, flanked by first responders.

“No reports of any fatalities, so I think we’re very lucky there,” he said.

There were reports of building fires, mostly as a result of gas leaks or gas-line breaks, Ghilarducci said.

State officials said all roads damaged by the quakes had been repaired and reopened.

Violent shaking also caused water-main breaks and knocked out power and communications to parts of Ridgecrest, home to about 27,000 people some 125 miles northeast of Los Angeles.