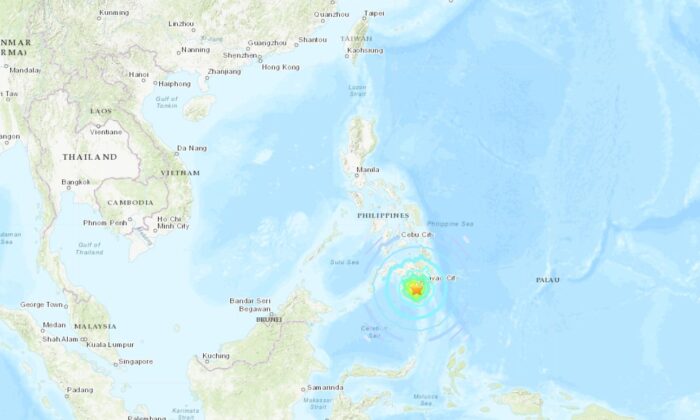 A powerful magnitude 6.9 earthquake in the southern Philippines killed three people and triggered the collapse of a three-story building, it was reported. (USGS)
Asia & Pacific

A powerful magnitude 6.9 earthquake in the southern Philippines killed three people and triggered the collapse of a three-story building, it was reported.

The earthquake had a depth of 17.5 miles and struck at around 12:11 p.m. local time on Sunday, said the United States Geological Survey (USGS).

CNN reported three people died, and a 6-year-old girl was inside her family’s home when the building collapsed. Mindanao province’s governor, Douglas Cagas, told CNN that she died as a result.

A statement posted by local officials called on everyone “to remain calm but stay vigilant in anticipation of aftershocks.”

“All concerned agencies of the government have been mobilized to respond to the present conditions and provide immediate assistance to those in need,” the authorities said. “The President was in his house in Davao City with his daughter Kitty when the earthquake struck. The First Lady Honeylet Avanceña was on her way home when the ground rumbled and moved. She said the car she was riding in was swaying. They are unhurt,” the statement continued.

Anthony Allada, public information officer of Magsaysay Town in Davao del Sur province, near the epicenter, said 14 people were injured but none seriously.

Roads and buildings, including the local government office, were damaged and power was out in the town, he said. The region was shaken by four powerful quakes in October and November, which together killed at least 20 people. “We don’t know what to do anymore. Do we respond first or attend to our families first?” Allada told DZMM radio via Reuters.

President Rodrigo Duterte’s spokesperson issued a statement about the matter.

“He is OK. He and his daughter Kitty were in their house when the quake struck,” presidential spokesman Salvador Panelo told Reuters. “First Lady Honeylet was on her way home when the ground trembled. She said her car was swaying. She is unhurt.”

There have been reports of multiple landslides and compromised structures across the region, reported the Philippine Emergency Alerts, which added there are several individuals trapped in the rubble.

Following the tremor, the U.S. Pacific Tsunami Warning Center stated there was no threat of a tsunami in the region.

The Philippines is located along the Pacific “Ring of Fire” that encircles the Pacific Ocean.

The “Ring of Fire” stretches from New Zealand to Indonesia before going to Taiwan, the Philippines, and Japan. Then, it stretches up to Russia and crosses over to North America through the Bering Sea. The west coasts of North America and South America are part of this seismically active region.