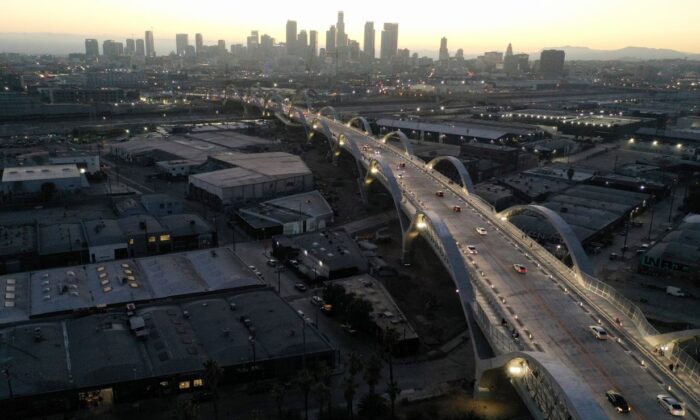 A $588 million bridge in Los Angeles was closed two weeks after it opened due to illegal activity, said the Los Angeles Police Department on Tuesday night.

“The 6th Street Bridge will be closed until further notice due to illegal activity and public safety concerns,” the LAPD wrote on Twitter, coming just two weeks after it opened. About 12 hours later, on Wednesday morning, the LAPD announced that the bridge was reopened.

Video shot from the bridge showed dozens of bicyclists taking over the bridge, also known as the Sixth Street Viaduct, on Tuesday night. No arrests or citations were announced by the LAPD.

Over the past weekend, the city started installing speed bumps along the bridge, said LAPD Chief Michel Moore at a meeting on Tuesday. Additional fencing and a center median to divide traffic lanes are also being considered, he said, reported the Los Angeles Times.

“The 6th Street bridge offered [the] type of opportunity for Los Angeles to be proud of a historic L.A. River, the origins of the city, as well as the viaduct,” Moore said. “Unfortunately, since its opening, it has also served, or become known as, a place where people are going to gather and conduct exhibitions.”

LAPD News: The 6th Street Bridge will be closed until further notice due to illegal activity and public safety concerns.

Moore was making reference to individuals taking over the bridge to carry out dangerous car stunts that often end in injuries and collisions. Spectators have also climbed on the bridge’s arches.

Those incidents, he added, “drawing finite resources, limited resources away from more pressing duties to ensure the safety of this location.”

Police have issued over 57 citations and impounded six vehicles over the past four days, Moore said on Tuesday, according to local reports.

The bridge has been closed down several times, including every night over the past weekend, the LAPD says on its Twitter account. On Friday night, individuals were pointing green lasers at police, Moore said.

“After a 2-hour closure, the bridge was opened,” the LAPD central division wrote on Friday. “In less than an hour, 200 people arrived for a street takeover, fireworks and vandalism. Maximum enforcement will continue over the weekend.”

The original bridge, which was built in 1932, had to be demolished in 2016 because it could not withstand powerful earthquakes, officials have said. Construction of the new Sixth Street Bridge started soon after that, costing $588 million.