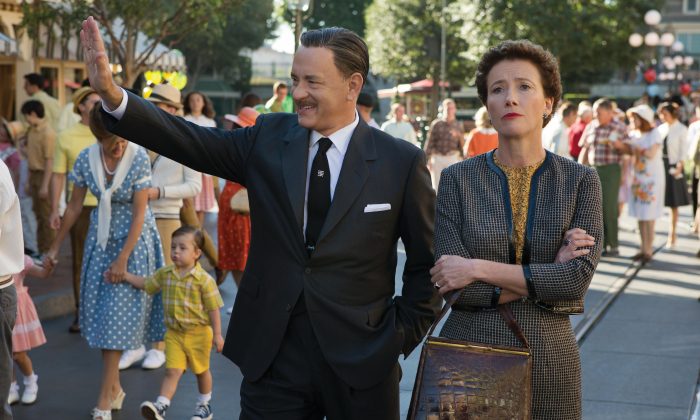 It was always improbable that Saving Mr Banks would peer into the darker recesses of the Magic Kingdom, especially when you cast the irrepressibly affable Tom Hanks as Walt Disney. John Lee Hancock directs with the same soft-focus lens he used to make the insufferably lightweight The Blind Side, telling a tale that’s anything but fairy, of two short weeks during which Disney pulled out all the stops in an attempt to persuade Mary Poppins author P.L. Travers that the movie interpretation of her flaying nanny saga would be supercalifragilisticexpialidocious.

Opposed to the thought of animated penguins, flouncy-trouncy musical numbers, Dick Van-Dyke, and her prized creation becoming part of the Disney dollar printing machine, Pamela (Emma Thompson), spends a fortnight with the creative team behind the movie, before deciding whether she’ll hand over the rights.

Juxtaposing her Los Angeles travails are flashbacks to her childhood, which provide echoes through time that go some way to explaining the origins of Poppins, and the reason that she’s a damaged soul, burdened with worry, abandonment issues, and an inability to comfortably interact with other human beings.

Put aside the sanitised characterisation and huge Disneyland promo reel that the entire movie is, and view it as an Argo style slice of PG-friendly behind-the-scenes ode to childhood dream-weaving, and Saving Mr Banks is an absolutely delightful piece of storytelling.

Accompanied by the sound of a jaunty tinkling piano, there are so many sequences brimming with smile-inducing joy, like the creative process behind ‘Let’s Go Fly A Kite’, which will add a toe-tapping tear to the mix. Anytime Travers shares a limousine ride with her kindly driver, played magnificently by Paul Giamatti, who provides a real heart-warming core to a story overflowing with sentiment, the film skips along on their chemistry. The multiple exchanges that see Disney exasperated at the author’s constant demands, such as her insistence that the film doesn’t feature the colour red, are charming, and indicative of the movie as a whole.

The substance beneath the glossy LA veneer arrives in the form of the flashbacks, featuring a melancholic, alcoholic Colin Farrell, and a frustratingly underused Ruth Wilson (Luther). They’re inventively woven into the story, if hugely unsubtle, and go some way into imbuing the story with an emotional wallop you’re not quite expecting by the conclusion.

It’s a narrative journey made all the more powerful by Emma Thompson’s superlative performance as the insular author. It’s quite incredible how she makes you warm to this rather sniffy and stubborn woman, before her back story and a gradual melting of her prim and proper exterior reveal an exposed, vulnerable person, drawn by her own upbringing. It’s a note-perfect turn, one of her finest, and one that never succumbs to award-baiting melodrama.

In more of a supporting role than you might imagine, and ably assisted by the wonderful trio of Schwarztman, Bradley Whitford, and B.J. Novak, Hanks is every bit the enigmatic theme park overlord you’d expect Walt Disney in a Walt Disney financed film to be. Infectiously enthusiastic, never falling into caricature, and incredibly likeable, it’s as awards worthy as Captain Phillips, but for completely different reasons. That’s the brilliance of an actor of Hanks’s calibre.

Transcending the Sunday afternoon matinee slot that the early scenes threaten to consign it to, and so much better than any literary biopic of recent times (Miss Potter springs to mind), Saving Mr Banks is a tale about the strength of family bonds, and one which has its fair share of magic dust sprinkled on it and the ensemble.