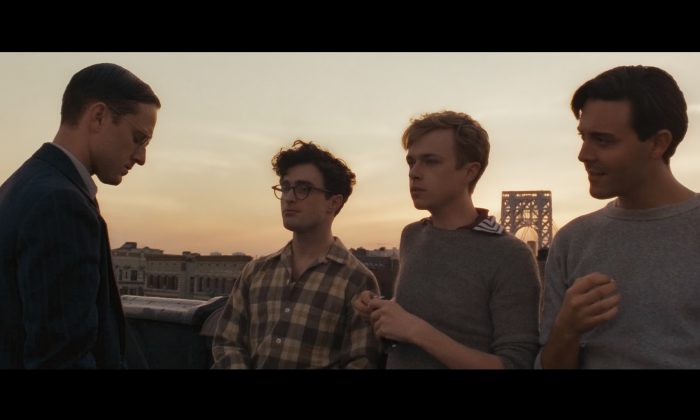 Kill Your Darlings is a second stab in as many years to try and capture the unique essence of the beat poet generation after the dull thud of Walter Salles’s adaptation of On The Road. This brings them together in an Avengers style tale of hedonism, wordplay, and murder-most-foul; starring Daniel Radcliffe as Allen Ginsberg, Dane DeHaan as Lucien Carr, Ben Foster as William Burroughs, and Jack Huston as Kerouac.

Charting their formative years, Kill Your Darlings is viewed through the skin shedding eyes of Ginsberg, as he arrives at college, to be immediately seduced by the intelligent confidence of Lucien Carr. What unfolds is a story of passion, deceit, and foul-play, which is so ludicrously intriguing, you’ll hardly believe it’s true.

He may be eager to escape from stories in which innocent boys are transported to an educational establishment in order to find themselves, but for Radcliffe, this couldn’t be further from the halls of Hogwarts. In fact, it’s clear from the outset that he is now a remarkable young actor, able to instantly erase the memory of that scarred forehead and stiff-as-a-board acting, with a faultless accent and the twitchy confidence of a young Ginsberg. It is an amazing feat to be able to completely disappear beneath the veneer of the character you’re playing, for the role to consume the performer to the point of being unrecognisable, and Radcliffe achieves this.

The script falters by being too briskly rock-around-the-clock and lightweight, and although focusing on a group of people who preach rhyme and rhythm, doesn’t actually find its own until about 30 minutes in. So despite being never less than intriguing, it’s really the excellence of the acting that draws you in.

DeHaan continues his own career trajectory with this sensuous, lizard-like performance; hypnotising those around him, a narcotic manifested, one more addictive than any consumed by these experimental young men. He is unsympathetic, and uncomfortably watchable. Foster and Huston (unrecognisable from his remarkable turn in Boardwalk Empire) offer able support, and Hall gets to play a more emotive psycho than the one we’re used to seeing on television.

Short shrift is given to Elisabeth Olsen as Kerouac’s suffering wife. A more detailed look at the neglect that the group’s selfish lifestyle had on their home life would have meant more time with the similarly sidelined Jennifer Jason-Lee and Kyra Sedgewick, and maybe added a layer of realism to what is a tonally inconsistent film.

Director John Krokidas mirrors his subject’s style with some impressive techniques of his own: there is a wonderful fusion of modern score with a mercifully light smattering of jazz, and the way in which he foregrounds the dialogue whilst muffling the background audio, is evocative of the lucid mood of the inebriated poets. The genesis of Ginsberg’s writing style is also creatively madcap, whilst the reverse film memory-recall sequences are a neat effect.

Kill Your Darlings is a tangled web of tremendous performances, historical hat-tipping, and wry smarts, all of which leave an indelible, entirely unexpected imprint on the viewer.