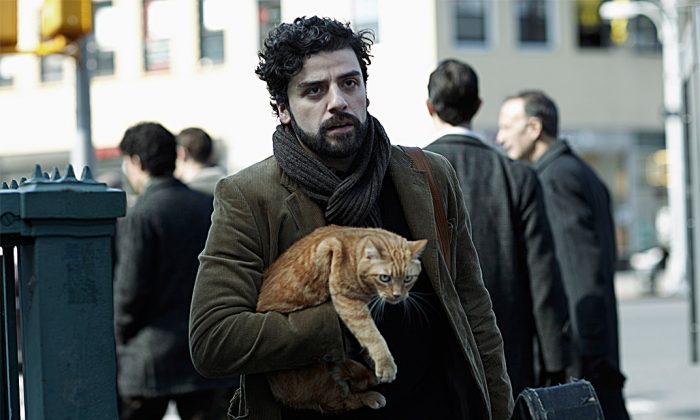 Framed with a close-up of Oscar Isaac singing “hang me, oh hang me”, effortlessly soulful and with a melancholically intoxicating effect, the Coen brothers’ latest hooks you during the opening riff. It demands your attention, and then, in a precedent setting second, strikes a comedic chord of deprecation as Llewyn undermines his superb performance with, “You’ve probably heard it before. It never gets old, never gets new. It’s a folk song”. It beautifully establishes a film layered with pathos, laughs, and another iconic, habitually useless central character.

It’s 1961 and Llewyn Davis (Oscar Isaac) is a couch surfing musician, wearied by failure and the break-up of his Simon & Garfunkel-ish group. Playing has become his job rather than a passion, and with a dwindling circle of friends, exhausted by his never failing to disappoint them, he is fast running out of excuses to let life pass him by. He’s constantly looking to take the easy way out, whether it’s the apathetic way he responds to some life changing news from his erstwhile friend Jean (Carey Mulligan), who affectionately refers to him as “asshole”, or the missed opportunity of royalties from an excellent little ditty recorded with Justin Timberlake’s Jim, Llewyn decides to let life’s rhythm blow him in a different direction one last time. So with guitar in tow and no fixed abode, he takes a road trip to Chicago.

Everything about Inside Llewyn Davis has a melody, from the office word-play between his hard-of-hearing agent and his elderly assistant; to the caustic exchanges between him and Mulligan (“You’re like King Midas’s idiot brother”), it never misses a beat. Even the roads have a rhythmic quality to them, repetitious and going nowhere, much like our front man.

It also helps that the music is exceptional, and tiny bowler hats must be tipped in the direction of Marcus Mumford (of Mumford & Sons), and T. Bone Burnett for some of the compositions. They are heartfelt and aching with the emotion that permeates the film, and it wouldn’t at all be surprising to see, amongst a litany of awards, that the south west Londoner gets to perform the sublime ‘Fare Thee Well’ come Oscar night.

Oscar Isaac wears the tragi-comic signifiers of a Coen brothers lead protagonist like none before him, but has the ability to have his foibles, although an integral part of what he’s singing, fall away whenever he picks up a guitar. His musical performance is extraordinary, his acting performance it’s equal. The script never panders to sentiment, and Isaac makes sure Llewyn doesn’t deserve it to. In truth he’s a bit of a jerk, especially when forced to interact with others, like during an uncomfortable dinner party sequence, or the way in which he treats a cat that he seems to have grown fond of. It’s heartbreaking but acts as an important metaphor for the way he lives his life. It’s a multi-layered, unpredictable, raw performance, which sticks with you beyond the ending of the film.

Some may have gripes about the ending, with the Coens failing to deliver this concept album’s cathartic bonus track, but that’s their loss, because this is a love letter to art, music, and film-making, and one which will be spinning on the record player for years.