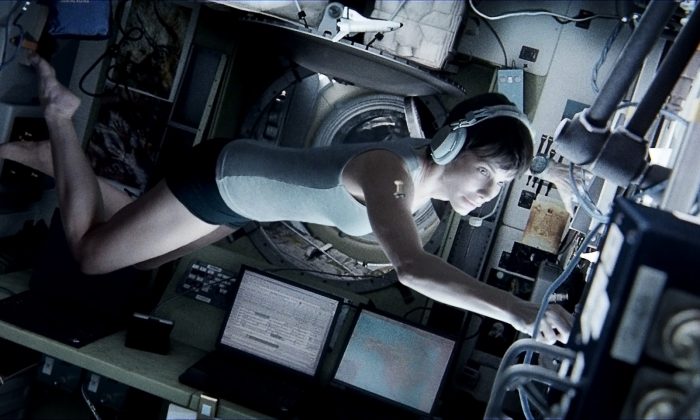 Once in a while a film so remarkable orbits the multiplex, one which exceeds the lofty expectations forced upon the viewer by the pre-release hype and a galaxy’s worth of five stars engulfing the poster. Gravity is that film.

Forget what you might have heard, even the good stuff, because nothing, nothing, can prepare you for the technical, emotional, near-perfect piece of art that Alfonso Cuaron has conducted between the planets.

We learn during an early exchange that medical engineer Dr Ryan Stone (Sandra Bullock) isn’t really at ease hanging in statis above the intimidating backdrop of Earth, a point accentuated with each stomach turning jolt of the machinery she’s working on. There to put her at ease with his comforting anecdotes and comical space-walking is retiring astronaut, Matt Kowalski (George Clooney). Their charming exchanges are given more urgency when mission control (Ed Harris, who has previous when it comes to space based problems) informs them that a collision between Russian satellites has caused a wave of debris to circle the Earth, and it heads their way with devastating consequences.

Remember when a film had the power to amaze? Before multiple trailers, and trailers-for-trailers had shown you the money shots? Think back to the first time you saw Stan Winston’s dinosaurs. Well, like those dusty memories, your initial reaction to Cuaron’s vision is how breathtakingly intimidating and alien it seems. We’ve seen space before, but not like this.

We’re dropped into the action, the camera drifting towards the repair crew, gently introducing the viewer to a point-of-view that is to be shaken from tranquility on a regular basis. To start with you’re gently nudged as the atmosphere shifts, accompanied by some stellar sound work which acts as a mechanic orchestra, throwing the character and audience off-kilter. Your nerves are settled by Clooney’s bravado as he circumvents the action like a crazed jet-pack wearing moth. Get used to the multiple angles, movement, and intrinsically important use of 3-D, because Cuaron then ups the ante and delivers ocular spectacle that’ll have you clinging to the edge of your seat for fear of drifting into the darkness.

Gravity isn’t simply a box of tricks though. At the centre of the maelstrom are two extraordinarily human performances, without which this would have simply been a spectacular technical showreel.

Bullock is revelatory. Her transformation from nervousness to single-minded determination is always kept believable because she maintains an edge of humanity that has been established by her conversations with Clooney, and sometimes herself. She may dress like Ellen Ripley, but she always remains empathically vulnerable during the intense action, sequences that are made nail-bitingly tense by what we know and like about her character.

Initially, Clooney is Clooney, laconic wisecracks to the fore, but these become important as the film progresses, his sense of humour used to give the increasingly frantic, oxygen deprived Stone her instructions – “grab him like he’s your valentine” as a way of getting her to cling onto a deceased crew member. And during the quieter moments, one in particular, a conversation set against the backdrop of the setting sun, their exchanges are wonderfully played out.

At one stage there is a sequence that beautifully apes 2001’s iconic imagery (Emmanuel Lubezski must be a dead cert for the 2014 Cinematography awards), and an introductory title card has echoes of Alien, but Gravity is its own beast, one to occupy the upper echelons of meaningless greatest film lists until the world stops spinning on its axis. And hyperbole aside, it’s simply terrifying.