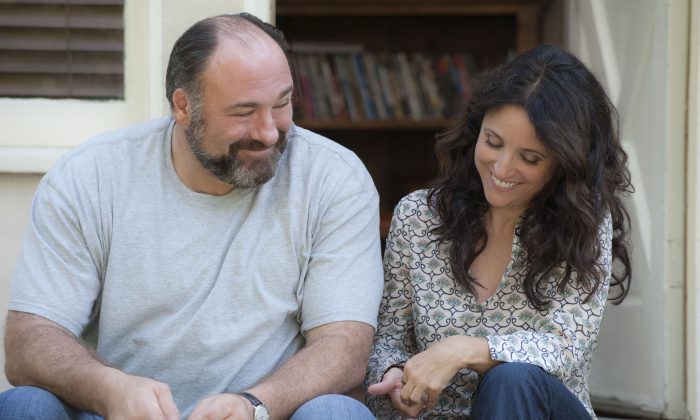 Even with the sombre, must-see melancholia hanging over the release of James Gandolfini’s final feature, Enough Said does enough to transcend that sad fact and emerge as one of the most genuinely delightful cinematic experiences of the year.

Bracket it among the likes of Something’s Gotta Give or the James L. Brooks canon, but with infinitely more realistically drawn characters, and you’ll get some idea as to what kind of movie Parks and Recreation alumnus Nicole Holofcener has created.

Eva (Julia Louis-Dreyfus) and Albert (Gandolfini) are both divorcees, and at a point in their life when they’ve gone beyond the superficiality of embryonic relationships. Introduced at a party, one where Eva audibly states that she finds nobody attending attractive, the two put aside their initial discomfort and decide to go on a date. In a refreshingly realistic manner, they become close, despite her hang-ups – she thinks he’s schlubby; he kind of agrees but makes an attempt to justify it.

The situation in this comedy arrives in the form of Catherine Keener’s free-spirit poet, Marianne, whom Eva meets at the same party, befriends, and takes on as a client for her mobile masseuse company. Much of their time is spent dissecting Marianne’s failed marriage; how he never exercised, how he was rotten in bed, and how he would separate the onions from the guacamole, an act that would cause Marianne to gag. The twist you can see coming a mile off is that her ex-husband is in-fact Albert, a revelation that forces Eva into an emotional juggling act to keep this knowledge under wraps.

This is unquestionably a movie that hinges on the performances of the actors, and as an on-screen eulogy Gandolfini excels in a rather charming, unexpected way. So often the all-encompassing heavy associated with mobster roles that defined his career, this incarnation is gentle, funny, and warmly self-deprecating in a way that hasn’t been seen since Get Shorty – and sadly, won’t ever again.

If Enough Said acts as a fond farewell to one of the greats, then it also heralds the long overdue breakout of Seinfeld, and more recently and impressively, Veep, actress Julia Louis-Dreyfus. Immediately likeable and effortlessly funny, she makes Eva a strong woman, one whose motivations are dictated by her own ill-advised life-needs, rather than that of the usual driving force in narrative cinema, the man. She is honest, hilarious, and self-reflective in a way that the comedically heightened Bridget Jones et al cannot come close to, and it’s so refreshingly brilliant that you forget Louis-Dreyfus has been around for so long.

Offering strong female support is Toni Colette, who continues to carve out a niche in dysfunctional relationships, after the similarly excellent The Way Way Back, and Catherine Keener, who is luminescent as Eva’s flowery new six-degrees-of-separation friend.

Although a comedy, nothing about Holofcener’s film is forced, with all of the laughs earned in a relaxed, mature fashion, often with bittersweet results for the characters, and with arcs which aren’t all neatly tied up in a bow, but thoroughly satisfy as the themes grow deeper and more dramatic.

This is a beautiful little love story for grown-ups, and one of those rare slices of on-screen life that’ll have you floating home from the cinema, eager to spread the word.