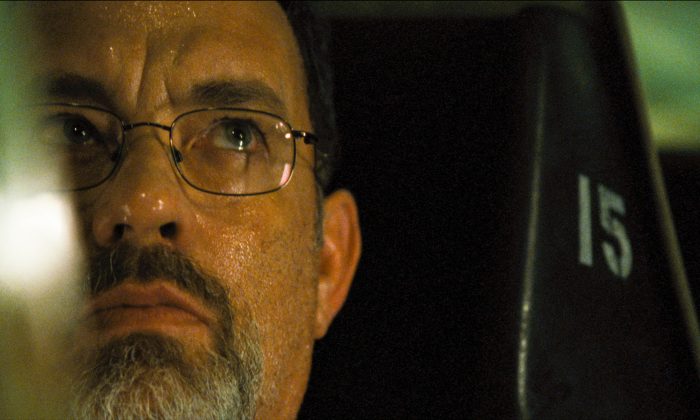 Paul Greengrass returns to his familiar shaky-cam real world playground to tell a story that is becoming commonplace on rolling news stations: the threat of Somali pirates patrolling the industrial shipping lanes around the Horn of Africa.

This is based on the true story of Captain Richard Phillips (Tom Hanks), the man at the helm of the MV Maersk Alabama, the first American flagged cargo ship to be hijacked in over 200 years. It’s a feat made all the more astounding by the sheer size of the vessel, and that the gang of pirates, led by the level-headed, “Skinny” Muse (Barkhad Abdi), were only five strong. With the takeover drill executed and the crew hidden away below deck, a stand-off ensues between the increasingly under-pressure Phillips and the pay-day seeking pirates, escalating into a military scale hostage crisis on the high seas.

Displaying all the signifiers of a Greengrass film – intensity, kinetics, whip-fast editing, and microcosmic attention to factual detail – Captain Phillips is, at times, a master class in tension building action. The initial pursuit, incorporating some great cat-and-mouse techniques, like increasing the size of the trailing waves in order to slow down the pirates, or the nail-biting attempts to shake their makeshift ladder from the side of the boat, belie the fact that this is a huge trawler ploughing through the sea. On paper, and in Speed 2: Cruise Control, such sequences wouldn’t have the same effect were they not viewed through the unique lens of Greengrass.

It was a smart choice to make Hanks the captain of this ship. He hasn’t seemed this tested in a role since Catch Me If You Can. The charming everyman is jettisoned for a reluctant hero, one constantly playing out the potential scenarios in his head, living on his nerves, and making mistakes. His final sequence, when the weight of what he’s experienced finally dawns on him, is heart-breaking, and among the actor’s very finest moments committed to film.

Of course Greengrass’s default political setting means the film pushes both sides of this tale of conflict to create a debate on the issues around globalisation and the motivation of the pirates. We see that it isn’t necessarily a choice that these men are making, they aren’t Hollywood “bad-guys”, as their proclamation of “no al-Qaeda here” testifies. As the face of the hijackers, Barkhadi Abdi is excellent. It is a quiet, effective performance of desperate naivety and as equally impressive as that of Hanks.

What prevents this from greatness is the unstable balance to those who aren’t of a nautical persuasion. The momentum of the takeover, the gunpoint exchanges, a wonderful fist pumping sequence during which Phillips performs some amateur role-play in order to convince the pirates that an air-attack is imminent, are all undone once the Navy arrives and the film becomes a talky, jargon heavy bore for about 40 minutes during the midsection. Shorn of this it would have been as taught and resonant as Greengrass’s finest hour, United 93, but as it stands, Captain Phillips still remains a powerfully acted, intelligent thriller.