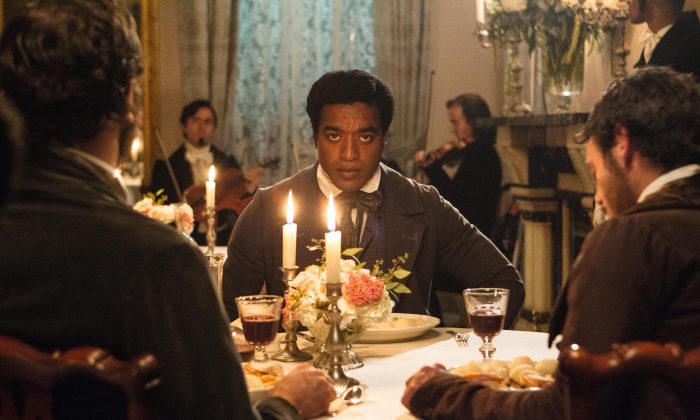 12 Years A Slave is arguably one of the most important pieces of cinema released during the modern era. Regardless of its merit as a piece of art and the amount of awards buzz the festival circuit has generated, it is a depiction of slavery directed by a black film-maker. It is perhaps why this isn’t a soft-focus tale of struggle, but a horror movie, one that pushes the pain, suffering, and dehumanisation of the black race during the 1800s, to the very limit of tolerance experienced by those at the end of the whip. It’s an exhaustively punishing watch, and justifiably so: a film with a voice as powerful as this deserves to be heard.

The true story of Solomon Northrup (Chiwetel Ejiofor) is an incredible one; a free man who lived with his wife and children in upstate New York, coerced into a job on the side thanks to his ability to play the violin, he suddenly wakes to find himself in shackles, without his papers, and hauled onto a slave boat headed towards Paul Giamatti’s reprehensible meat market. Sold or traded throughout a 12-year ordeal, he is subjected to and witnesses cruelty on an unparalleled scale based purely on the colour of his skin, all the while attempting to contact those he knew in the North to try and secure his freedom.

The bulk of his ordeal is at the hands of Edwin Epps (Michael Fassbender), a particularly malevolent trader who uses obscure biblical motivation and a truly nasty streak to make his “property” suffer. Solomon must bide his time in order to find a slither of hope amidst a hopeless situation.

Because he’s the subject of the film (and the fractured structure of a dozen years dictates he’s the constant focus), it’s hard not to begin a dissection of this film with the all-encompassing turn by Chiwetel Ejiofor. We, like him, are yanked from increasingly despairing situations, and although this pattern and the early pace of the film means that we initially aren’t given much to go on beyond a stoic family man, it is his quiet power with which he excels throughout the movie, wide eyes filled with necessary repressed emotion. He gets some big moments grandstanding against his oppressors as the years go by, but it’s never needy of recognition or showy, always restrained, and the smaller moments leave the most indelible mark on the viewer. A burial sing along, shot in close-up, during which he succumbs to the union of one voice, is heartbreakingly underplayed, as is his conversation with Brad Pitt’s liberal traveller.

Others impress with their limited screentime: Sarah Paulson is venomously evil, equally so, Paul Dano, doing what he does best, and Benedict Cumberbatch, also excellent as the good-natured trader, burdened by the knowledge that what he is doing is wrong. Aside from Ejiofor, it is Fassbender who leaves the deepest scar, with a turn that is vileness personified. Unkempt and intimidating, especially in his treatment of Patsey (the marvellous Nyong’o), he manifests one of the most detestable characters ever committed to film.

The violence may upset some viewers, with one powerfully acted, excruciatingly visceral sequence being almost unbearable, but not in the way you’d imagine. The imagery is kept largely off-screen, with sound effects and Ejiofor’s reaction providing the stimulation. But it’s uncomfortable for a reason. Two minutes of you sitting awkwardly in your seat at the recreation of something people experienced for unfathomable reasons only goes to underline the power of McQueen’s movie. Slavery is so often romanticised in Hollywood cinema; here it is an embarrassing piece of American history, correctly documented in all its inexplicable brutality.

And as for McQueen, he doesn’t do anything too unique; the film is lensed with the familiar eye of many a historical biopic, ably supported by another stirring score from the ever-present Hans Zimmer. Everything is kept respectfully simple, allowing the narrative, anchored by an odds-on Oscar winning central performance, to tell this quite astounding story.