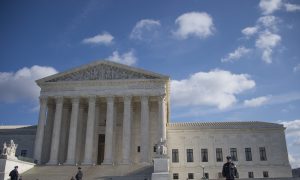 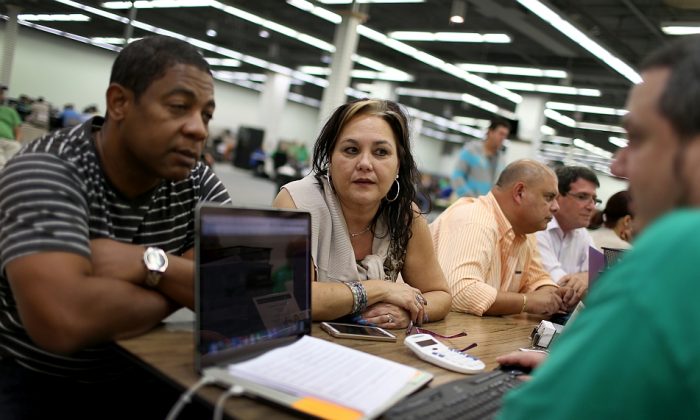 Jose Ramirez and Mariana Silva speak with an agent from Sunshine Life and Health Advisors, as they discuss plans available from the Affordable Care Act in Miami, Florida, on Dec. 15, 2014. (Joe Raedle/Getty Images)
US

More than 11 million people signed up for subsidized health insurance by the Feb. 15 deadline, according to the White House on Tuesday. It was 11.4 million more or less, and President Barack Obama did a small victory dance.

He stated: “The Affordable Care Act is working. And I’ll tell you, everywhere I go around the country, I’m meeting individuals who come up and thank me. How passionate they are about the difference its made in their lives, it really reminds me why we do all of this.”

The numbers may grow or shrink, because this week is a grace period for those who started but did not finish an application before Feb. 15. People may complete applications through Sunday, Feb. 22. That could increase the figure. If those who did sign up do not follow through and pay their premiums, the numbers would drop as those people fall off the rolls.

Senate Democrats would like an even longer grace period for those who did not begin to apply in time. There are still roughly 30 million uninsured adults in America. The main purpose of the Affordable Care Act was to make sure more people had health insurance, according to the White House.

According to the Kaiser Family Foundation, cost or fears about cost were the biggest barriers. KFF surveyed uninsured adults and found that a majority of them thought they could not afford to buy health insurance. More than half of those, 53 percent, would have been eligible for help to pay their premiums, but did not know it.

Kaiser reported that confusion played a role in blocking people from getting subsidies. “Among the uninsured who were eligible, and who sought coverage, 37 percent say they were told they were ineligible for it.”

Even five years after the law was passed, misinformation and lack of information block people from getting health insurance.

“The findings show how important it is to come up with more effective strategies, in person, online and elsewhere, for educating people about their eligibility for coverage and financial assistance under the law,” said Rachel Garfield, a senior researcher for the foundation, in a news release.

This year, technical problems were no longer a big part of enrolling. The website worked decently, unlike the dysfunction of the first year’s rollout.

A very substantial minority are not eligible for any federal support. Nearly 4 million adults fall in the “coverage gap,” meaning that they live in the half of states that chose not to expand Medicaid. Those people earn too much to qualify for Medicaid but too little to qualify for private insurance premium subsidies. Other ineligible people include illegal immigrants and people who are offered insurance through work but do not accept it.