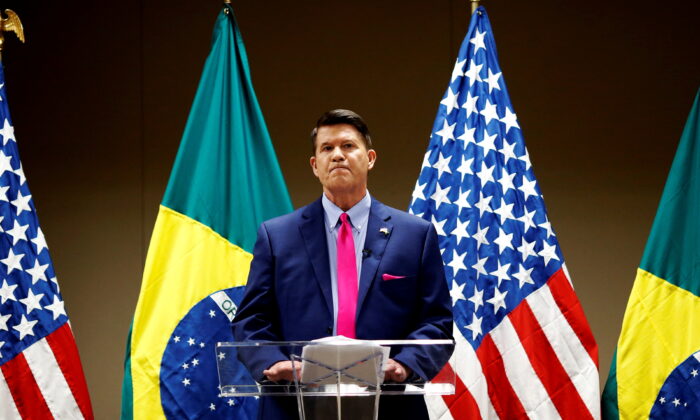 U.S Under Secretary of State for Economic Growth, Energy, and the Environment, Keith Krach speaks during a meeting with businessmen, economists and journalists to discuss excluding China's Huawei Technologies Co from Brazil's 5G market, in Brasilia, Brazil, on Nov. 11, 2020. (Adriano Machado, Reuters)
Americas

53 Nations Commit to Excluding Untrusted 5G Vendors From Their Networks

“Brazil became the 50th member of the Clean Network, followed by Ecuador and the Dominican Republic, and Jamaica is on the way,” Krach said. “In just six months, the Clean Network alliance of democracies has grown to 53 nations strong, and it represents two-thirds of the world’s global domestic product,” Krach said in a Nov. 24 statement.

The goal is to exclude untrusted 5G suppliers “such as Huawei and ZTE, which are required to comply with directives of the Chinese Communist Party” in the United States and participating countries.

The alliance is part of the Trump administration’s “comprehensive approach to safeguarding the nation’s assets including citizens’ privacy and companies’ most sensitive information from aggressive intrusions by malign actors, such as the Chinese Communist Party,” according to the department.

“Having the Clean Network is very important to fight cybercrime, data breaches, and money laundering, as well as to attract investments to new value-added products and services, which will require innovative solutions. A network is only as strong as its weakest link,” said Augusto Lins, president of Stone, a $20 billion Brazilian company that provides financial technology solutions.

“A Clean 5G Network is not just about cell phones; it is about critical manufacturing processes, oil and gas platforms, and power networks, sanitation systems, and internet of things. The Clean Network will help ensure that Brazil’s critical infrastructure—power, transportation, and sanitation systems—is safe and reliable,” Siemens Brazil, a division of the German-based multinational technology company, said in a statement.

Krach, together with his Brazilian and Japanese counterparts, also launched a new trilateral forum called Japan–U.S.–Brazil Exchange. One of its objectives is to expand economic cooperation and foreign investments including cooperation on the development of “transparent and secure 5G networks based on the foundation of free and fair competition, transparency, and the rule of law, in line with their national legislation, policy priorities and international obligations,” according to a joint statement.

In Ecuador, Krach met with Ecuadorian President Lenin Moreno to discuss steps to drive American private-sector investment to Ecuador, according to a statement. Moreno has already implemented in Ecuador reforms needed to address economic challenges.

Ecuador Minister of Telecommunications Andrés Michelena said it’s important to protect the country’s telecommunications infrastructure as well as the personal data and privacy of its citizens.

“Ecuador also reiterated its commitment to join efforts in pursuit of an open and secure global internet, based on democratic values ​​and respect for human rights,” Michelena said in the statement. “Ecuador supports the principles of the Clean Network initiative.”

Dominican Republic’s Minister of Foreign Affairs Roberto Alvarez said in a statement: “It is critical that the data traveling through the Dominican Republic’s 5G infrastructure remain secure. The Clean Network provides countries and companies with a reliable base to guarantee the safety and security of their most sensitive information.”

Krach also visited Chile and said that its government “is getting closer to a Clean Network decision” and Chile’s private sector leaders understand the criticality of securing 5G infrastructure to protect their industries and clients.

In Panama, Krach met with Foreign Minister Alejandro Ferrer as well as other senior finance, security, and telecommunication officials.

“Panama has positioned itself as an innovation hub in Central America,” Krach added.

When the Clean Network initiative was launched six months ago, “it looked like it was too late to prevent the Chinese Communist Party’s Huawei from being deeply embedded in the next generation of global telecommunications,” Krach said at a press conference on Nov. 25.

Huawei, a Chinese telecommunication technology company, had at that time “91 commercial contracts worldwide, including 47 from Europe,” Krach said.

Currently, 27 of the 30 NATO allies are part of the Clean Network, 26 of the 27 European Union members, and 31 of the 37 nations of the Organization for Economic Co-operation and Development (OECD) have joined the network.

“As a result, Huawei’s vaunted 90 deals have dwindled to just 12 outside of China. It has proven China Inc. is beatable and in the process exposed its biggest weakness, and that’s trust,” he said.