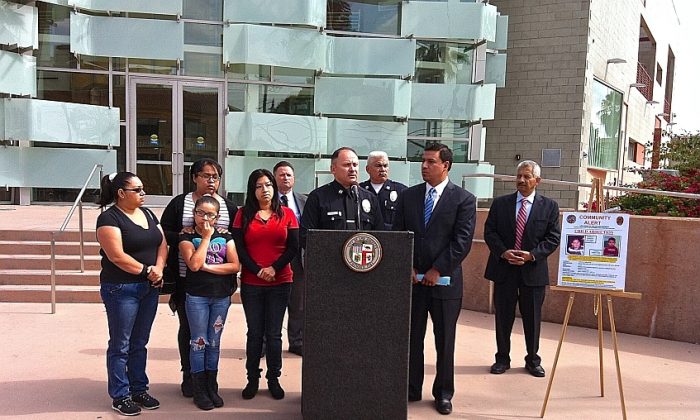 Family members of abducted toddler Edwin Vargas watch as LAPD Capt. Martin Baeza (C) and Councilman José Huizar (2nd R) announce a $50,000 reward for the return of Edwin and the arrest of his father, in Los Angeles on June 17, 2014. (Sarah Le/Epoch Times)
US

LOS ANGELES—A $50,000 reward is being offered in connection with the safe return of a 2-year-old boy and the arrest of the boy’s biological father for allegedly kidnapping the toddler, the LAPD announced Tuesday.

Twenty-seven-year-old Abraham Vargas is suspected of abducting his son Edwin Vargas outside of his estranged girlfriend’s house around 6:30 p.m. on March 23 in the Boyle Heights area of Los Angeles.

“$50,000 is a lot of money,” said LAPD Capt. Martin Baeza. “And we’re hoping that that’ll spark somebody to give us some information that will lead us to finding, first of all Edwin, and second of all the arrest and prosecution and eventually the conviction of Abraham Vargas.”

Police said the boy’s mother, Beatrice Perez, had sole custody of Edwin and had a restraining order against his father for domestic violence.

The day of the kidnapping, authorities said Perez had put her son into her Nissan minivan and gone back to the apartment to get her daughter. Vargas, who was apparently waiting nearby, shoved Perez to the ground, jumped into the minivan, and drove off with the young boy.

The minivan was found about five hours later in East Los Angeles, but there was no sign of the boy or his father. A felony warrant for kidnapping was issued for Vargas on May 30.

“We are here today with his family to plead for the public’s help, in helping arrest what we consider a dangerous man,” said Huizar.

Huizar said that on the same day of Edwin’s kidnapping, he was across the street at Lorena Street Elementary School celebrating its 100-year anniversary. The councilman lives in Boyle Heights with his wife and four children.

“It was just a somber feeling that people had at what should have been a celebration, he said. “Because it’s a horrible thing to think that your child is taken away from you.”

Police said Vargas had made previous threats to Perez to take their son Edwin to Mexico.

However, police said he was sighted twice recently in the Boyle Heights area without the child. He is thought to have altered his appearance by shaving his head and growing a goatee. He was also seen riding a black BMX-style bicycle, according to LAPD detectives.

Police said Abraham Vargas is also under investigation for an unrelated incident of unlawful sex with a minor.

Beatrice Perez said through a relative’s translation that all she wanted was her son back. “With one phone call, we’ll know where he’s at,” she said.

Authorities said any information about Vargas or the child, no matter how insignificant it may seem, could help bring Edwin home.

Edwin Vargas is Hispanic with brown hair and eyes, about 2 feet tall, and 30 pounds.

An estimated 1,923 cases of family abductions occur every year in California, according to the Department of Justice.