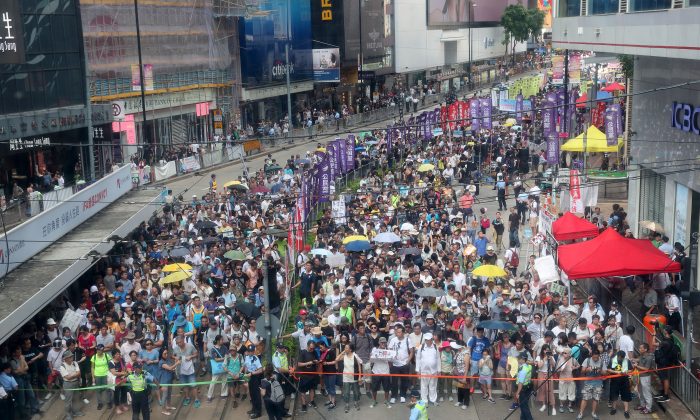 In Hong Kong, tens of thousands of pro-democracy activists and those dissatisfied with Beijing’s rule took to the streets on July 1 to voice their opposition.

The protesters, estimated by organizers to number around 50,000, called for an “end to one-party rule and against the fall of Hong Kong.” The anti-Beijing sentiment of the rally is considered to be the strongest in recent years—a stark contrast to the celebratory tone of Hong Kong officials who convened to commemorate the 21st anniversary of the handover of Hong Kong from the United Kingdom to China in 1997.

Hong Kong police gave a much lower figure for the turnout—about 9,800.

The July 1 march has been an annual occurrence since 2003, when a massive 500,000 crowd protested against Beijing’s attempt to insert an “anti-subversion” clause in Hong Kong’s Basic Law, or constitution, that many believed would lead to suppression of civil freedoms.

Civil Human Rights Front, a pro-democracy Hong Kong organization, has been the march organizer since 2013.

Legislator Au Nok-hin, who is also the vice-convenor of the Civil Human Rights Front, said that the march is calling for an end to “one-party dictatorship” while upholding the “one country, two systems” principle—a framework of governance agreed upon by the UK and China that would allow the city to be run autonomously. However, a growing number of Hongkongers see encroaching influence from Beijing in recent years.

Anson Chan, former chief secretary for both the British colonial government and the Hong Kong government after transfer of sovereignty to China, was among those who participated in the July 1 march.

“With the current situation in [Hong Kong], I believe many people are worried about the region’s future. So there is a special need for people to express their views on July 1,” said Chan in an interview with The Epoch Times.

Chan added, “I personally hope that the chief executive [head of Hong Kong government] would thoroughly implement ‘one-country, two systems … to secure our basic freedom, the spirit of the rule of law, and our way of life.”

Also taking part in the parade were hundreds of Falun Gong adherents. Falun Gong, also known as Falun Dafa, is an ancient spiritual practice with meditative exercises and moral teachings. Practitioners from Hong Kong and nearby Asian countries joined the protest to call on the Chinese regime to end the persecution of adherents in mainland China, who have been systematically harassed, arrested, detained, and tortured since July 20, 1999. Then-Chinese Communist Party leader Jiang Zemin ordered a campaign to eliminate the practice as it grew more popular, with official estimates of roughly 100 million.

Thousands of practitioners are confirmed to have died while under persecution, though true numbers are likely higher due to the difficulty of getting sensitive information out of China, according to the Falun Dafa Information Center.

A mainland Chinese tourist surnamed Yi, from Jiangsu Province, voiced his support for Falun Gong practitioners. “Jiang Zemin has committed an enormous crime. And he should be punished,” Yi said.