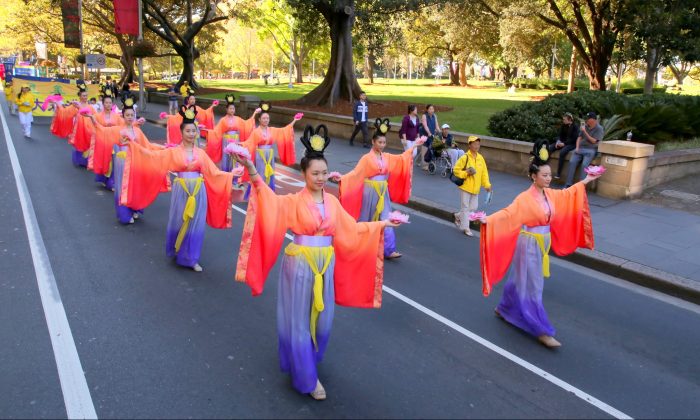 Sydney Falun Dafa practitioners participate in a World Falun Dafa Day parade in Sydney on May 5, 2018. Falun Dafa is a Buddha-school practice based on the universal principles of Truthfulness, Compassion and Forbearance. (Linda Zhang/The Epoch Times)

On Saturday, May 5, around 500 Falun Gong practitioners gathered in downtown Sydney to celebrate Falun Dafa Day, marking 26 years since the Buddha-school system of Falun Dafa, also known as Falun Gong, was first taught to the public by Mr. Li Hongzhi in 1992.

Falun Gong practitioners could be seen doing a peaceful meditation exercises in the morning in the Hyde Park, which was followed by a grand parade along Elizabeth Street.

The celebration attracted Sydneysiders and tourists, many of whom stopped to watch and take photos of the many colourful costumes and different musical and dance performances in the parade.

After observing the meditation exercise demonstration, Kevin, a young man from England, said that he would find a local exercise site when he went back home so that he could try the meditation.

Victoria, a photographer, was attracted by the sight of the peaceful meditators, and took photos to share on her Instagram. She said she believes that with more people doing meditation, they generate a strong positive energy that can be of benefit to the entire society.