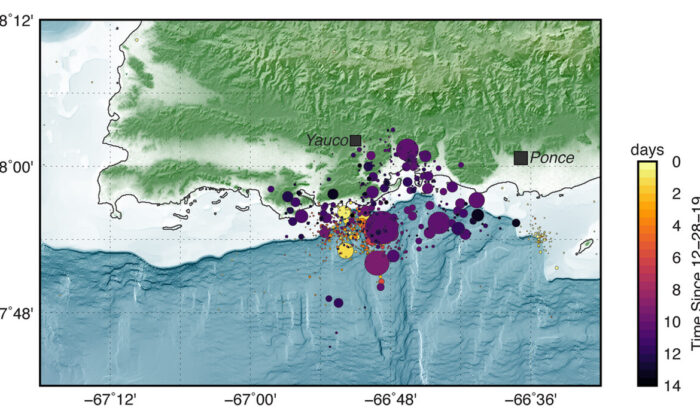 More than 500 earthquakes of magnitude 2 or greater have occurred in and around Puerto Rico since a magnitude 4.7 earthquake struck in late December. (USGS)
US News

More than 500 earthquakes of magnitude 2 or higher have occurred in and around Puerto Rico since a magnitude 4.7 earthquake struck in late December, including a 6.4 magnitude quake that caused widespread damage and power outages across the island last week. The agency warned Sunday that even more aftershocks could hit.

Over the weekend, a 5.9 magnitude aftershock rocked Puerto Rico, stunning the island in the aftermath of the 6.4 magnitude tremor.

The agency warned that more earthquakes could strike Puerto Rico after Jan. 12.

“The USGS aftershock forecast, updated on Jan. 12, indicates the likelihood of an M 6.0 or larger aftershock over the next seven days is 11 percent,” according to the agency on Sunday. “There is also a high likelihood of M 3.0+ aftershocks in the coming week; these M 3.0+ quakes may be felt near the epicenters. The rate of aftershocks will continue to decline over time. A large aftershock or new mainshock would, once again, increase the frequency and magnitude of aftershocks. Estimates for other magnitude ranges and time periods can be found in the forecast.”

The agency noted that the most likely scenario over the coming days is that the aftershocks “will continue to decrease in frequency over the next 30 days, with no further earthquakes similarly sized to the M 6.4 that occurred on Jan. 7.” There is a 76 percent chance of it happening, the USGS noted.

“Some of these moderately sized aftershocks (M 5.0+) may cause localized damage, particularly in weak structures. Smaller magnitude earthquakes (M 3.0+), when at shallow depth, may be felt by people close to the epicenters,” it said.

Over the next week, according to the USGS, there’s only a 3 percent chance of an aftershock of a magnitude 6.4 occurring.

Many people on the island remain in shelters. Some sleep outside in open plazas out of fear that buildings may collapse, according to reports.

Trump “ordered federal assistance to supplement Commonwealth and local response efforts due to the emergency conditions resulting from earthquakes beginning” on Dec. 28, the White House wrote.