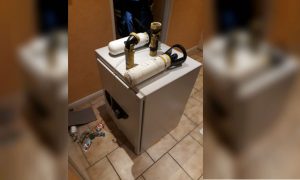 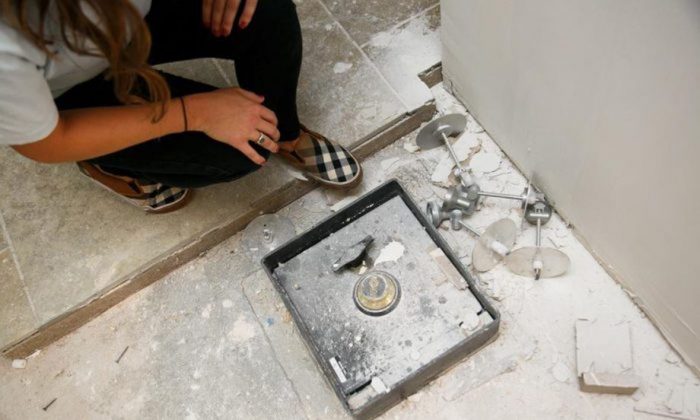 A couple was doing some work on their home when they found a 50-year-old safe hidden behind a wall.

The couple in Phoenix, Arizona was astonished to find the old safe as they demolished part of their kitchen in the midst of renovations.

After moving in, they discovered a code in the medicine cabinet. They tried the code, and the safe opened, according to an account posted on Reddit and Imgur.

“We stared in disbelief. Time stood still,” the woman shared on Imgur.

“I started to reach in the safe and Eddie yelled, ‘Wait it might be booby trapped!’ I’m still laughing at that one,” the woman added.

They also found a book inside the safe, titled “A Guide for the Perplexed” by E.F. Schumacher published in 1977.

Inside was a black and white picture of a mystery man with a message: “Alan, I have a book you must read. I’ve underlined a few key passages. Your friend, Vincent.”

The underlined passages in the book seem to be clues, she noted.

On page seven, an underlined passage of the chapter titled, ‘On Philosophical Maps’ reads: “One way of looking at the world as a whole is by means of a map, that is to say, some sort of plan or outline that shows where various things are to be found.”

Tucked into the same page is a map of Arizona, and the city of Mesa circled along with an “X” marking it.

On page eleven there was a photo of a house has text written underneath: “There yielded such fruitful results.”

On the back of the picture shows a tree split into three. “Where one tree becomes three” is written on it.

Also, on page 14, an underlined passage reads, “Most Modern Readers will be reluctant to believe that perfect happiness is attainable by methods of which their modern world knows nothing.”

A Bingo card that was with the book has three numbers circled, another potential clue.

The woman and her partner previously said that they will try to get the money back to Alan, wherever he is.

“If Alan is still out there, it was meant for him after all,” she said.

“But we’re keeping the bourbon!”