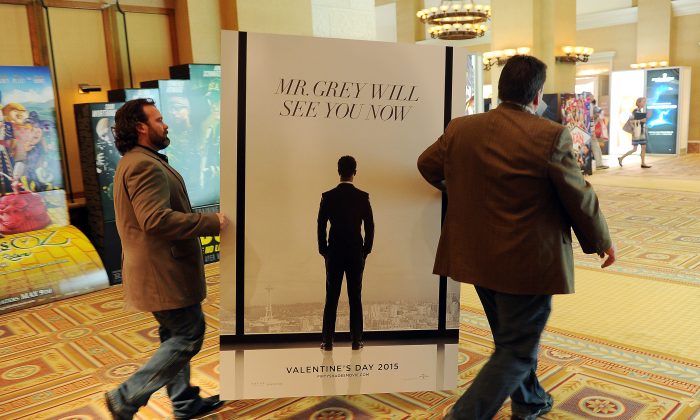 Sheldon Domke, left, and Adam Mast move an advertisement for the upcoming film "Fifty Shades of Grey" during the second day of CinemaCon 2014 on Tuesday, March 25, 2014 in Las Vegas. The film is set for release Valentine’s Day of 2015. (Photo by Chris Pizzello/Invision/AP)
Entertainment

A new photo from Fifty Shades of Grey, slated to come out Valentine’s Day 2014, has been released.

And despite being in the movie, Johnson has said she won’t let her mother see the movie, E! News reported.

“I have not seen Fifty Shades of Grey. I don’t think I’m going to see it,” said actress Melanie Griffith, who is Johnson’s mother. “[Dakota] was like, ‘You guys cannot come. There’s no way.’ So we’re not going. I did go visit for a couple of days when they were shooting just normal stuff. I did see the Room of Pain—I did go in there and check it out.”

The picture comes weeks after a study found that women who read the best-selling novels will have a higher chance of being in an abusive relationship.

“If women experienced adverse health behaviors such as disordered eating first, reading ‘Fifty Shades’ might reaffirm those experiences and potentially aggravate related trauma,” Amy Bonomi, with Michigan State University, told the Washington Post. “Likewise, if they read ‘Fifty Shades’ before experiencing the health behaviors seen in our study, it’s possible the books influenced the onset of these behaviors.”

However, the study did not determine if the reported abuse took place before or after participants read the book.
“The book is a glaring glamorization of violence against women,” Bonomi said, accoridng to the report, adding that the protagonist “begins to manage her behavior to keep peace in the relationship, which is something we see in abused women. Over time, she loses her identity.”