Pelosi: National Guard to Stay at Capitol 'As Long as They Are Needed'
0
Share Now
TelegramFacebookTweetEmailTellMeWeReddit
Copy Link 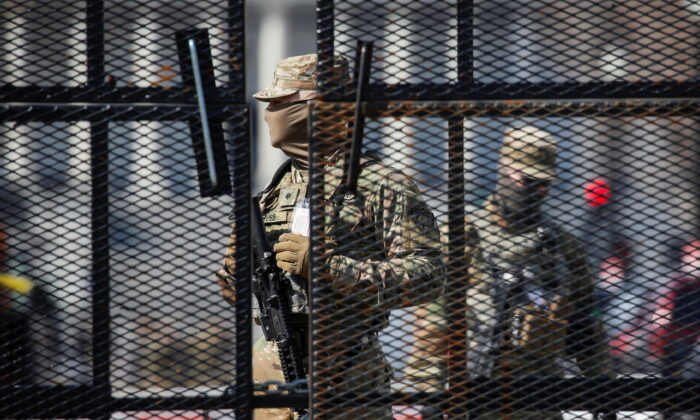 National Guard soldiers stand guard behind a security fence near the U.S. Capitol in Washington on March 4, 2021. (Jim Urquhart/Reuters)
US News

Approximately 50 National Guard personnel were treated for gastrointestinal issues after eating what was described as poorly prepared food, a Pentagon spokesman said on Monday.

Six of that set were treated at outpatient military facilities while the others received care at an aid station, John Kirby told reporters at a briefing.

Some of the 5,100 troops who remain on duty at the U.S. Capitol complained of undercooked food, including raw meat. The Michigan National Guard called the reports, which included photographs, “very concerning,” and top officials from the state communicated their dismay to top defense officials.

According to a report, over a dozen service members were hospitalized after consuming the food.

A National Guard spokesman told The Epoch Times last week that there did appear to be some poorly prepared meals but said no cases of foodborne illness had been reported.

Kirby said Monday that no Guard members have been hospitalized due to foodborne illness.

He also said he recently met with Army Gen. Daniel Hokanson, the chief of the National Guard, and that leaders are making sure guardsmen deployed in Washington get healthy meals.

The leaders “are taking very seriously the need to make sure that the troops have safe and nutritious food,” Kirby said. “There’s routine inspections. He himself goes down there multiple times a week to eat with the National Guardsmen—to eat what they’re eating.”

Contractors provide food to the troops. Officials said the vendor facilities were inspected multiple times, with no substantial issues found, and that they observe the deliveries of the meals, take pictures of the food, and inquire with soldiers regarding what’s being served.

The food issues prompted a bipartisan group of lawmakers to call for per diems for the troops, as well as retroactive payment for members who bought meals because of worries about sanitation.

Troops were surged to Washington in January following the U.S. Capitol breach and thousands remain in the city despite objections from a number of legislators.

“The USCP is extremely grateful for the Department of Defense and the National Guard support provided since January 6th. We understand the Guard has a tremendous service need back home responding to the COVID-19 pandemic,” the agency said in a statement, adding that threats to members of Congress are up 93 percent in the first two months of this year when compared to last year.

Pentagon officials haven’t yet said whether they’ll grant the request.