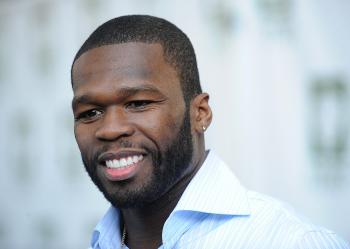 50 Cent made a recent appearance with his group G-Unit on MTV looking rather thin, adding to the buzz surrounding his recent weight loss. The rapper also announced an upcoming role in a film he helped write, "Things Fall Apart," in which he portrays a cancer patient. 50 Cent has lost a considerable amount of weight and plans to lose more.

50 Cent has some bad press earlier in the year with rumors of steroid use that were never confirmed, and now he’s clearly headed in the other direction. The multi-platinum recording artist is known for rapping onstage with a bulky figure, but is setting his tough guy stage presence aside to make the film directed by Mario Van Peebles. 50 Cent has lost over 50 pounds on a new liquid diet, reported Entertainment Weekly.

50 Cent is currently in Louisiana shooting a film where he plays a police officer. The film entitled “Microwave Park” is set in the Hurricane Katrina aftermath. Val Kilmer and Sharon Stone are the primary stars of the movie. The rapper grew his hair into an afro for the film.

Following the role in "Microwave Park," 50 Cent will embark on his roll as a cancer patient in "Things Fall Apart."

50 Cent appeared on MTV and discussed how he does his new lightweight workouts alone to avoid joking from his G-Unit friends.

“I keep them away from me. I don't want too many of them there because they'll start laughing … They see me doing something that's so not me that they're laughing. It's too much of a distraction so I keep them away,” 50 Cent told MTV.