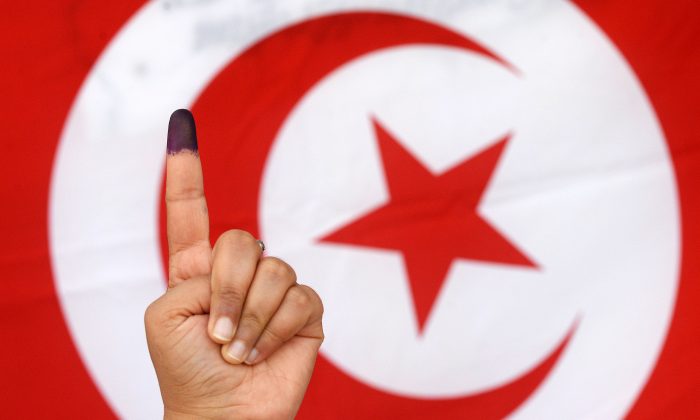 A Tunisian woman raises her ink-stained finger in front of a national flag after casting her vote in the country's first post-revolution presidential election on Nov. 23, 2014, at a polling station in the capital Tunis. (Fadel Senna/AFP/Getty Images)
Africa

5 Years On, Tunisia’s Jasmine Revolution Continues From the Ground Up

Tunisians are marking five years since the culmination of their “Jasmine Revolution.” Since its longtime authoritarian leader Zine El Abidine Ben Ali was forced out of office in January 2011, Tunisia has been embarking on a long transition to constitutional democracy—a transition that, although very bumpy at times, has nevertheless led to two successful multi-party elections and a new constitution.

The award of the 2015 Nobel Peace Prize to the Tunisia National Dialogue Quartet, representing Tunisian civil society, was but one of many recognitions by the international community for the progress the country has made on its path to a stable and democratic new order.

The ability of Tunisia’s president and the opposition leader to compromise and work with other national, social, and political movements has become the safety net for the country during this tumultuous transition process.

During my many visits to Tunisia over the last four years, I witnessed the transition process through its highs and lows. My most recent visit was in August 2015, just after the terrorist attack in the coastal city of Sousse that left 38 people dead, mostly British tourists.

In spite of the tragic loss of life and the damage done to the national economy, Tunisians have developed a remarkable resilience and are able to pick themselves up and move on. That capacity is inspired in no small part by the country’s leaders, especially the two “sheikhs,” as some have now began to call them: President Beji Caid Essebsi and Rashid al-Ghannoushi, respective leaders of the two largest political parties, Nidaa Tounes and Ennahdah.

The two men’s ability to compromise and work with other national, social, and political movements, such as the Dialogue Quartet, has become the safety net for the country during this tumultuous transition process.

The latest development in the state-building process is the recently published draft local government bill. On the face of it, it seems like a set of technical changes—but in fact, it’s a core part of the project to fundamentally change the way Tunisia works.

Localism has a particular resonance in post-revolutionary Tunisia. What’s often forgotten is that Tunisia’s revolution started brewing months before, when Mohammed Boazizi set himself on fire in December 2010 in the town of Sidi Bouzaid. And he did so in protest at the harassment and humiliation inflicted on him by a municipal official.

The bill’s aim is to create a decentralized system of government that supports work, freedom, and social justice—precisely the slogans of the Jasmine Revolution.

The Tunisians I’ve spoken with have high hopes for a truly decentralized form of government, where they will truly have the opportunity to participate in the decision making process and make their voices be heard. If local governments can respond quicker and more effectively to local issues, the argument goes, Tunisia will be a far more stable and happy place than it was under decades of centralized authoritarianism.

However, there is little debate about the possible costs of decentralization. Political offices could yet be captured by local elites; after decades of centralized authoritarianism, local legislators are generally inexperienced; and highly localized government can of course be very expensive. Still, the draft legislation does include some safeguards to protect the process. The decentralization process will be gradual, and economically lagging areas will benefit from extra financial support to keep them from falling behind.

It’ll be a long time before we can tell whether these measures work. But for now, the World Bank at least is willing to give Tunisians the benefit of the doubt: it has agreed a funding package of $300 million in 2014 to support governance reform, endorsing the changes to local governance as “transformational.”

Tunisia still faces huge challenges. But with the constitution in place and responsible political leadership guiding the process, all is by no means lost.

Adnan Saif is a Ph.D. student at the international development department at the University of Birmingham in the U.K. This article was originally published on The Conversation.