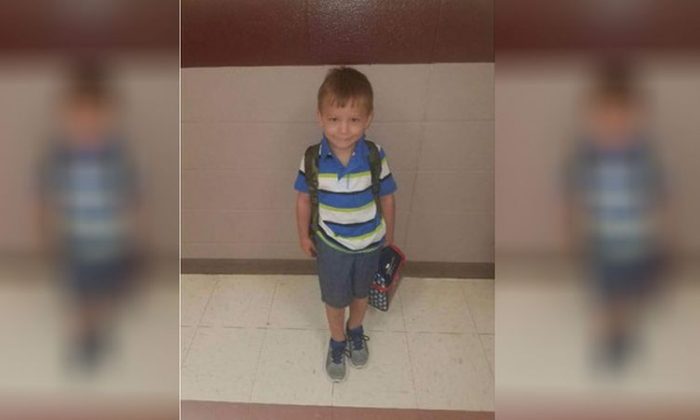 Rylan Ward, in a picture posted to a crowdfunding page set up to fund his medical care needed after being shot on Nov 5. (GoFundMe)
US News

The 5-year-old boy who was shot five times in the Texas church tragedy is finally heading home from the hospital—and he’ll be traveling in style.

Rylan Ward was caught up in the mass-shooting in Sutherland that killed 26 people, including his stepmother and two sisters.

The first person to attend to him at the scene was first-responder Rusty Duncan, who has been visiting him in hospital during his recovery.

Duncan will be personally picking him up today from the hospital as the little boy asked—in a fire truck.

Duncan called for people to join in, to “line the streets” to welcome Ward home after two months in the hospital.

Ward has been in the hospital since the shooting in early November at the First Baptist Church, recovering from multiple gunshot injuries.

His relative Heather Bradley explained how she heard the news that he was finally going home on a GoFundMe page set up to fund his extensive treatment.

“Once he came back from therapy, he had lunch at the park, then we walked a couple miles around the hospital grounds,” she wrote on Jan. 10. “Then the good news came that he will be going home on Thursday. Thanks to everyone that helped Ryland through this journey.”

He is due to be released around 1 p.m., according to Duncan, who is encouraging others to get in touch and join the escort.

“Ryland is getting out of the hospital this Thursday and I’ll picking him up in our Big Red Fire Truck like he wants!,” Duncan posted to Facebook. “We are getting a full escort together from the University Hospital to Sutherland Springs.”

“Please spread the word and share this post so we can line the streets and welcome this wonderful little boy back.”

Duncan is a member of local Stokedale Fire Department, a volunteer organization.

The fire truck will be provided by Wilson County Fire Department. Marshal Edwin Baker told KSAT that most of the department’s personnel involved in the escort are those who attended the tragic shooting on Nov. 5.

His mother, Chancie Mcmahan, wrote on Facebook that she had “tears of joy” on hearing that her boy was finally being discharged from the hospital.

Ward required multiple surgeries and extensive rehabilitation. According to KWTX, he was shot twice in the leg, twice in the stomach, and once in the elbow. Bullets shattered his femur, and caused damage to his kidney, bladder, intestines and scrotum, reported NBCFW.

$156,380 has been raised towards his medical costs via the crowdfunding site GoFundMe, where messages of support celebrated the announcement that he was finally heading home.

“Prayers will continue for this little trooper,” wrote one donor. “What a blessing to have him home again. May God’s blessings be with you every day.