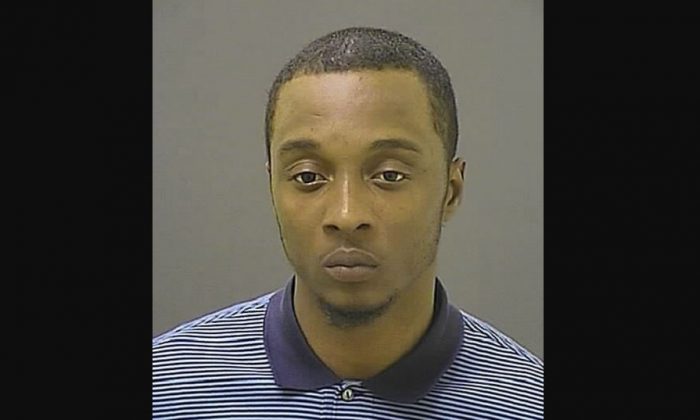 Keon Gray, 29, was arrested in Baltimore, Maryland, for the murder of Taylor Hayes, 7, on Aug. 17, 2018. (Baltimore Police Department)
Crime and Incidents

A 5-year-old girl who was shot in Baltimore, Maryland, on Nov. 19 is the younger sister of Taylor Hayes, a 7-year-old who was shot dead while sitting in the back of a car on July 5.

The 5-year-old was shot in west Baltimore in the groin area late Monday and rushed to the hospital.

Police officials told WJZ that she was expected to survive after undergoing surgery, and the broadcaster identified the girl as the younger sister of Hayes.

“A citizen looked outside and saw the child laying on the sidewalk suffering from a gunshot wound,” Baltimore police told Fox 45, which said the girl’s name is Amy.

The shooting was likely a shootout between suspects in a vehicle and suspects on foot, officers said.

Happening Now: BPD at shooting scene at Mosher St. & McKean. Neighbors are telling us little girl was shot. There is a baby doll lying face down in the street(in picture). No word on child’s condition. @FOXBaltimore pic.twitter.com/2XKunDZden

A neighbor who noticed the little girl was shot drove her to the hospital.

Neighbor Doretha Carpenter said she ducked for cover in her home when she heard the gunshots. When she went outside later, she learned the girl, her godchild, had been shot, and saw her baby doll in the street.

Carpenter told the Baltimore Sun that the girl had been walking to the corner store when she was shot. “I hope my baby is OK,” she said.

Brandon Scott, a Baltimore councilman, spoke out about the people who shot the girl. “Only a pure coward would shoot a baby and leave her in the street! Somebody needs to buck up and tell us who shot this baby,” he said via Twitter.

Taylor Hayes was shot while sitting in the back of a vehicle in July and a bullet struck her in the back.

Keon Gray, 29, was arrested in August. Court documents obtained by WBFF showed Gray had been arrested and convicted of three crimes.

“Keon Gray is prohibited from possessing a handgun because he was previously convicted on the following cases,” read the statement of charges.

Gray was charged with first- and second-degree murder, first-degree assault, and gun charges, reported WBAL. “I lost my daughter. They still got their kids. I don’t have my 7-year-old daughter anymore,” said Shanika Robinson, Taylor’s mother, told the broadcaster after the charges were filed.

“It won’t bring Taylor back, but at least we’ll get some type of justice and we just want to thank everybody,” added Ebony Ward, Taylor’s aunt.

“It was just outstanding work. We gratefully appreciate it from the bottom of our heart, every tip, everything that led to the person who did this.”

Gray was denied bail at a hearing in late August, reported the Baltimore Sun.

Gray’s girlfriend Daneka McDonald, 33, was charged with accessory after the fact and obstruction.

The charges came after officers found a loaded gun, heroin, and a digital scale in their vehicle.