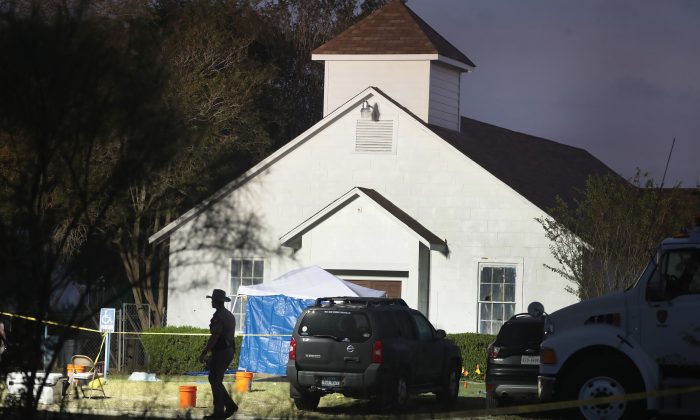 A badly wounded five-year-old boy was found by his aunt among dead bodies in the Texas church where a gunman killed 26 on Sunday, Nov. 5.

The boy, Ryland Ward, had four gunshot wounds to his stomach, groin, and arm, his uncle, Michael Ward, told The Dallas Morning News. The boy’s aunt Leslie Ward found him in the sanctuary among the pews after the shooting.

“I found my nephew in the front, in pain,” she told The New York Daily News. “It was bad. There were just dead bodies everywhere. It wasn’t what I wanted to see but at the time, I wasn’t worried about it. I was worried about finding my family.”

The boy lost his mother, Joann Ward, in the shooting together with sisters Brooke Ward, 5, and Emily Garza, 7.

His uncle carried him out of the church and his aunt comforted him until help arrived and he was taken by helicopter to a hospital.

The boy was out of surgery and in stable condition as of Sunday night.

Michael and Leslie Ward live a few blocks from the shooting scene, the First Baptist Church of Sutherland Springs.

Leslie was setting up a yard sale when she heard the shots. It sounded fast, like a machine gun to her. The word was spreading fast in the tiny town of only several hundred. Soon, she heard from somebody there was a gunman shooting inside the church.

She ran inside the house and woke up Michael. His brother Chris’ family often attends the church so they called him, but got no answer. They jumped in their car and drove to his house.

He was after a night shift and skipped the service that morning. But his family went. At first, he didn’t believe what Michael and Leslie were saying. “I’m not lying to you, Chris, they’re all shot,” Michael said.

When Chris realized what was going on, he immediately ran to the church. He didn’t even put his shoes on.

Kelley, 26, entered the church around noon, wearing black tactical-style outfit and body armor, armed with an AR-15-type rifle. He killed 26 people and wounded 20.

Upon exiting the church, he was confronted and shot by Stephen Willeford, 55, a local resident. Kelley dropped his rifle, ran to his car, jumped in, and began to flee.

The good Samaritan asked another Texas man for help and the two began to pursue the suspect in their vehicle.

Investigators believe that Kelley then shot himself. Authorities found him dead in his vehicle.