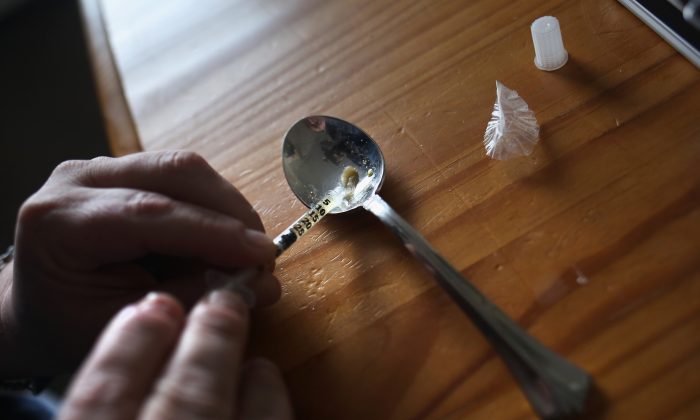 A heroin user prepares to inject himself in New London, Conn., on March 23, 2016. (John Moore/Getty Images)
US

A 5-year-old student at a Trenton, New Jersey, kindergarten brought 30 packets of heroin to school earlier this week, police said.

At the International Academy of Trenton, a teacher thought the boy was playing with a candy wrapper. After confiscating it, she realized it was a packet of heroin, and when she peered in his lunchbox, it was discovered the boy had 29 more packets inside, reported The Trentonian.

The boy was rushed to Capital Health Medical Center in Hopewell. He was tested and came back negative for opioids, a Trenton police spokesman told the paper.

Police are now trying to determine how exactly the boy got a hold of the dangerous drug that has caused countless overdose deaths across New Jersey and the United States. No one has yet been charged, CBS News reported.

The school, meanwhile, hasn’t yet released any information, with officials adding that a news release will be sent out later. Police wouldn’t say if they had interviewed the parents of the child.

The Child Protection and Permanency department was contacted to help in the investigation, PIX11 reported.

Despite the bizarre circumstances surrounding the incident, New Jersey has been inundated with stories of heroin overdoses over the past several years.

As the website NJ.com noted, if all the heroin addicts in New Jersey, which has a population of around 8 million, were sent to live in one place, it would be the state’s fourth-largest city and would have a population of at least 128,000.