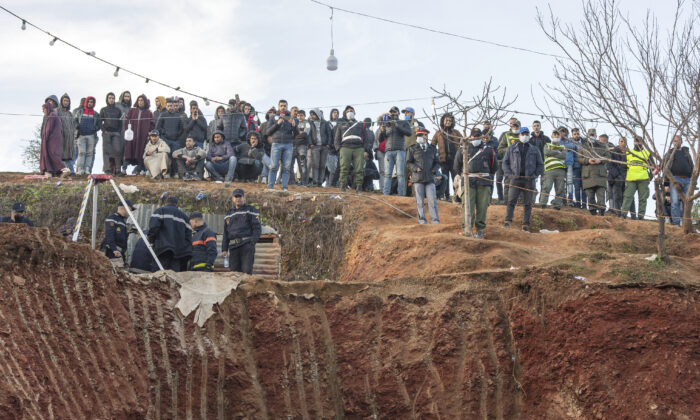 Residents watch in concern as civil defense and local authorities dig in a hill as they attempt to rescue a 5 year old boy who fell into a hole near the town of Bab Berred near Chefchaouen, Morocco on Thur. Feb. 3, 2022. (AP Photo)
World

Rescuers in Morocco on Thursday worked for a second day to rescue a five-year-old boy who fell into a 32-meter well.

The incident occurred in the village of Ighran in the northern tourist hotspot of Chefchaouen on Tuesday evening.

MAP news agency reported that rescuers have been digging a hole parallel to the well in an attempt to reach the child, named Ryan, using five bulldozers.

Local authorities said the digging has so far reached 19 meters.

The rescue operation is ongoing, although progress has been limited due the pit’s narrow diameter, they added.

The boy is being watched through a CCTV camera and is being supplied oxygen and water through pipes.

Abdel Hadi Temrani, from the rescue committee, told local news channel 2M that medical officials remain on site ready for intervention once rescue efforts come to fruition, adding that a helicopter is also on standby to transport the boy to the nearest hospital.