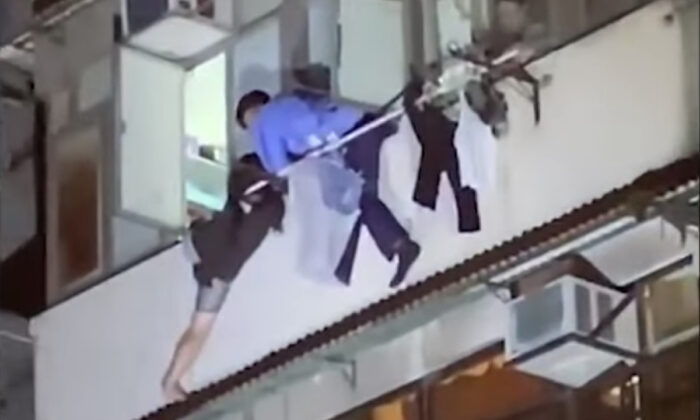 A 5-year-old boy was found unconscious in subdivided flat. His mother attempted to jump off a building. She was arrested for murder later. Sep 3, 2022. (Big Mack/ The Epoch Times)
HK Current Affairs

A family tragedy occurred in Sham Shui Po, Hong Kong, in the early morning on Sept. 3. At about 1:00 a.m., a passerby found a woman sitting dangerously by the window of a sub-divided flat on the fourth floor of 2M Shek Kip Mei Street near Tai Nan Street, Sham Shui Po, and immediately reported the incident to the police.

The firefighters responded by setting up a ladder and breaking the door to enter the unit in question. The 34-year-old woman was about to leap down when the firefighters and police rushed forward to pull her back and take her to Caritas Hospital for treatment.

At about 3:00 a.m., the woman was transferred to Princess Margaret Hospital.

Firefighters also found a 5-year-old boy in the subdivided flat unconscious on the bed, and the ambulance immediately rushed the boy to Kwong Wah Hospital for treatment.

According to sources, the boy was covered with suspicious wounds all over his body and further investigation will take place.

The police classified the case as a “murder,” and Sham Shui Po Division Crime Unit Team No. 3 takes over the investigation.

According to police sources, the flat involved was a subdivided flat, and the woman, her husband, and three children lived there for about five years. The eldest daughter is nine years old, the elder son was five years old, and the youngest son is two years old.

At that time, only the woman and her elder son were in the subdivided flat; the daughter and younger son had been taken care of by relatives and friends before the incident; the police were trying to contact the woman’s husband.

According to the flat owner, the woman lived with her husband at the beginning, but then the man “left” and never returned. The woman had since cared for her three children all by herself.

It is reported that the woman was in financial difficulties and did not get Comprehensive Social Security Assistance. She lived on casual work and often failed to pay her rent. The daughter and younger son had been handed over to her elder sister for care, while she continued to take care of the second son.

The 5-year-old boy was found with a blackish face. He was short and very skinny and had a body size of a two to three years old.

The mother, Lai Shing Tai, 33 year old, suspected of murdering Lai Yat Ming, her 5-year-old son on Sept. 2, appeared in the West Kowloon Magistrates’ Court in the morning on Sept. 5.

The accused did not have to defend herself for the time being, and she did not apply for bail. The case was postponed until Nov. 28. The defendant was returned to the custody of Siu Lam Psychiatric Hospital, and her two children have been temporarily placed under the care of the Social Welfare Department.

On Sept. 5, the reporter visited the neighborhood where the crime took place, and spoke to a nearby laundry store owner, Ms. Dai. She said she didn’t have much of an impression of the family involved and that she did not know about the tragedy until the morning after the crime when many police officers and reporters arrived at the scene.

“I think it is very tragic, the deceased was too young, and I feel very upset having known about this,” she said.

She added, that there are many subdivided units in the neighborhood; some of the tenants would move out after a year or so, and the neighbors are relatively distant from each other.