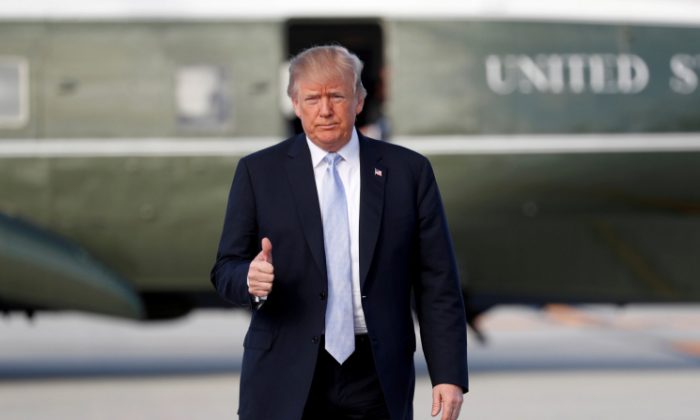 5 Victories for Trump in Gaining Support for $1.3 Trillion Budget Bill

President Donald Trump secured five major victories in the $1.3 trillion budget bill that lawmakers finalized on Wednesday night, including a massive boost in military spending and initial funding for a border wall with Mexico.

The president indicated his support for the budget in a Thursday tweet, celebrating the victories and lamenting “wasting money” on giveaways to the Democrats.

Got $1.6 Billion to start Wall on Southern Border, rest will be forthcoming. Most importantly, got $700 Billion to rebuild our Military, $716 Billion next year…most ever. Had to waste money on Dem giveaways in order to take care of military pay increase and new equipment.

Congress has until midnight on Friday to pass the bill to avoid a government shutdown. The bill is over 2,000 pages long. Below are five major wins for Trump within the hefty legislation.

1. Initial Funds for a Border Wall

The budget bill includes $1.6 billion in funding for a wall on the southern border. The amount is far short of the $33 billion required for the construction of the entire wall but is still a major victory because Democrats have until now unanimously opposed any funds for the barrier.

The $1.6 billion will be used to fund 90 miles of wall construction and related technology.

Throughout his presidential campaign and since attaining office, Trump has emphasized the need to properly fund the military. The new budget includes $700 billion in military spending and a further $716 billion for the next fiscal year.

Trump has made fighting the opioid epidemic one of his top priorities. The new budget provides $4.6 billion for the effort, a $3 billion increase.

Each day, more than 115 Americans die from opioid overdoses, according to the National Institute on Drug Abuse.

Trump has outlined a three-pillar plan for combating the epidemic, which includes programs for reducing demand and over-prescription, cutting off the supply of illegal drugs, and helping those struggling with addiction.

The budget includes funding for Trump’s wide-ranging infrastructure plan. The vast majority of American people and businesses support investing in the nation’s infrastructure. Lawmakers from both sides of the aisle agree on the measure.

Trump has long highlighted that America’s elections are vulnerable to malicious interference and voter fraud.

The president created a commission to investigate the issue early in his term but eventually disbanded it due to resistance from mostly Democrat state election authorities in providing information.

The new budget includes $380 million in grants for election integrity and security, a major win for Trump and advocates of fair elections.

There have been at least 1,107 proven instances of voter fraud which led to 961 criminal convictions, according to a database maintained by The Heritage Foundation.