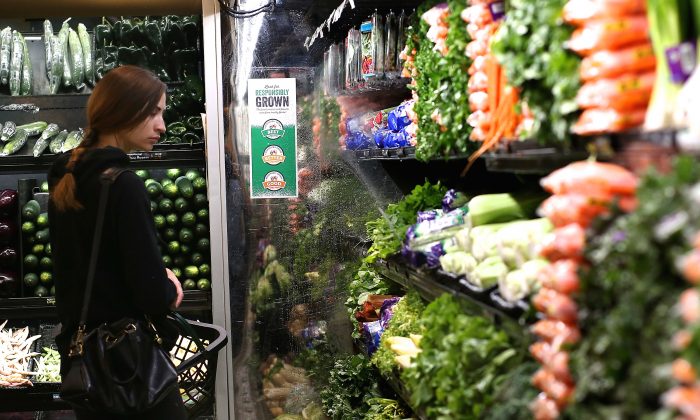 Defective imports from China, from pet food that kills pets, to toys containing lead, have grabbed headlines in United States for years. Regulations in China are lax, and the communist regime regularly attempts to cover up domestic food scandals.

Vegetables are no exception. Chinese farmers often use dangerous amounts of chemical pesticides, fertilizers, and preservatives to give vegetables a deceivingly healthy appearance. And even if a product has the “organic” label on the package, in reality, no one verifies this claim.

While there is no way to know whether the same vegetables adulterated in China are those exported to the United States, the U.S. Food and Drug Administration inspects less than 3 percent of imports for violations and deficiencies.

China is the largest agricultural economy in the world and produces a significant portion of many foods Americans eat, including apples, tomatoes, and mushrooms.

Fact: 64,876 tons of dried, fresh, or chilled garlic, were imported from China in 2014, according to data from the International Trade Centre (ITC), a part of the United Nations Conference on Trade and Organization. About a third of the garlic in the United States comes from China.

Problem: According to a report from the popular news portal Sohu, some of the garlic produced in Yongnian County in Handan, Hebei, a center of garlic production in China, have been sprayed with illegal pesticides. An undercover magazine reporter investigating in the area found that many vegetable farmers used phorate and parathion, two pesticides banned by the government, to irrigate the crops to save time and effort.

In recent years, China has not only had a problem with contamination of agricultural products, but also with pollution as a whole, which has reached record levels due to industrial production.

An official government report in 2014 showed that nearly a fifth of China’s soil is contaminated by heavy metals like cadmium and arsenic as well as unhealthy amounts of pesticides and fertilizers. Severe pollution has tainted all of China’s major rivers with large amounts of industrial chemicals and household waste.

Furthermore, many cities are engulfed in smog, a combination of smoke and fog, that leads to respiratory diseases. In March 2014, Premier Li Keqiang declared “war” on pollution in China to limit smog and environmental pollution, but so far the campaign has met with limited success.

Fact: About $8 million worth of mushrooms, dried or fresh, were imported from China in 2014, according to data from the U.S. Department of Agriculture.

Problem: A Mrs. Gao, according to the state-run China News Service, was washing white mushrooms she bought in a market in Chongqing when she realized that they were turning the water milky white, and leaving behind an odd residue. “At the time when I bought them, the mushrooms were really white, without a touch of dirt. They appeared quite clean and fresh.”

That’s because they’d been treated with sodium sulfite, a chemical used to whiten and preserve food. Excessive intake can cause severe damage to the liver and kidneys.

Fact: $47.5 million worth of prepared soybeans were exported from China to the United States in 2014 according to the U.S. Department of Agriculture.

Problem: In April 2009, a Mr. Chen in Wuhan, Hubei Province, unintentionally discovered that many of the fresh peas and soybeans on the market had been soaked in bleach and food coloring to enhance their appearance, according to a report on Tencent, a major news portal.

In a shopkeeper’s home, he found a room filled with peas and soybeans as well as large containers brimming with green liquid. The authorities later discovered the beans and peas had been immersed in water containing significant amounts of sodium metabisulfite, added for its bleaching effects, and green coloring agents. The owner revealed they did so to intensify the apparent freshness of the product.

Fact: $2.3 million worth of dasheen, a form of taro, were exported to the United States in 2014 according to the U.S. Department of Agriculture.

Problem: A taro will start to turn slightly yellow or black within an hour of being skinned, but some taros stay white for a long time in Wenzhou City, Zhejiang County. According to a report from Zhejiang Online, a news source in the area, some shopkeepers added dangerous amounts of sulfur dioxide to peeled taro and potatoes to whiten and preserve them for longer periods of time.

Fact: The United States imported 4.1 million pounds of frozen sweet corn from China in 2009 according to data from the U.S. Department of Agriculture’s Economic Research Service.

Problem: Some vegetable producers in China add to their corn sodium cyclamate, an artificial sweetener banned by the FDA. With this food additive, no matter how long customers boil it, the corn retains its bright yellow hue and tastes extra sweet, according to 365jilin.com, a major Chinese news station in Jilin Province.

Associate Professor Liu Junmei at Jilin Agricultural University says it is permitted in small amounts in fruit juices and corn broth, but not on frozen corn and other similar products. When eaten in large amounts, it can damage the liver.