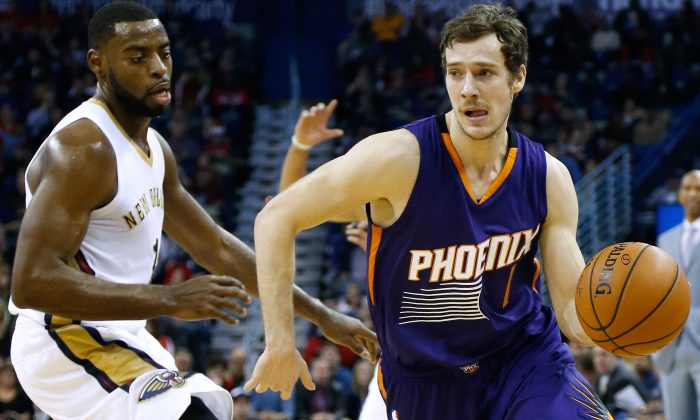 Goran Dragic has reportedly asked for a trade, and a number of teams have jumped at the chance to obtain the star guard.

Dragic gave the Suns a list of seven teams that he’s willing to re-sign with if he’s traded–a list that includes the Los Angeles Lakers and Miami Heat, reported USA Today and Yahoo.

But other teams not on the list–such as the Houston Rockets–are also pursuing Dragic, hoping to sway him by the time the offseason rolls around since whichever team acquires him will obtain his Bird rights and be able to offer him an extra year on a max deal.

And Dragic could possibly OK destinations not currently on the list, such as the Indiana Pacers, sources said.

Indiana has maintained interest in Dragic, has a need for a point guard, and should vault back into serious contention after the return of Paul George.

At the same time, the Suns could hold onto Dragic and hope they can convince him to stay before the offseason. If the team deals him, though, here are five potential deals based on published reports and available assets.

Goran Dragic has officially put himself on the block with his assertion he won’t re-sign.

Phoenix wants an All-Star potential player and at least one high draft pick for the guard. The Rockets have both these assets.

Houston really wants a top notch point guard and are confident they can convince Dragic to re-sign after this season. What could help their cause? Acquiring Goran’s kid brother Zoran in the deal, and maybe even giving him a little playing time.

Another potential deal involving Dragic has him going to the Rockets but the Nugget stepping in as a third trade partner.

In this version via ESPN, Denver gets two young prospects as it sends away an established player.

Phoenix needs a boost on the wings and Wilson Chandler can also play the four in a pinch, as P.J. Tucker does at times.

The Miami Heat are in the mix on a few things, namely Dragic. Miami is believed to be dangling a package built around forward Luol Deng and a draft pick.

Since the Heat are on the “approved” list, Phoenix could draw more assets from them than some other teams.

The Heat would like to make an upgrade for a post-season push and are at the table with the Suns, although they may not have the best offer.

Lakers Give In to Suns’ Demands

Los Angeles has been told by Phoenix that the only way the Suns will do a deal involving Dragic is if L.A. takes off the top-five protection for the draft pick from the Steve Nash deal.

The Lakers would likely finish out of the top five if the team acquires Dragic anyway, so they might as well remove the protection. Since the Suns need big men, and since Dragic has leverage, maybe that’s the only draft pick they need.

L.A. would likely never give up both the pick and Julius Randle, also.

Indiana has targeted Goran for a while, and would be happy to bring his brother on board as well since it really wants Dragic to sign with them over the offseason.

Although the Pacers aren’t believed to be on Dragic’s short list of teams he’ll definitely re-sign with, Indiana will be able to convince him with the help of Paul George.

With George, Dragic, and David West and Roy Hibbert, the Pacers should compete for the playoffs this season and a deep run next season.