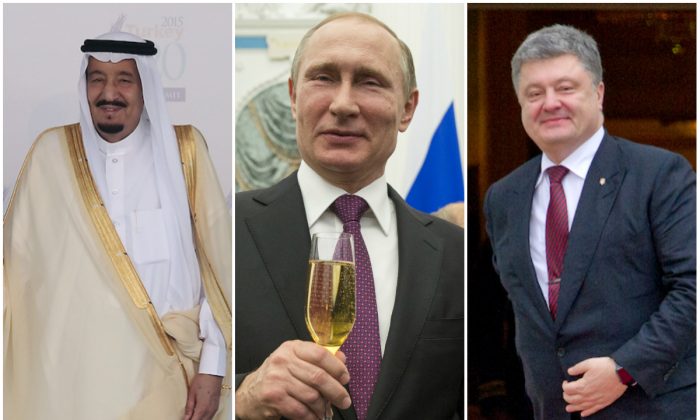 Here’s what you need to know about the massive leak from Panama law firm, Mossack Fonseca:

1. What Are the Panama Papers?

One of the biggest leaks in history, The Panama Papers reveal how the rich and powerful, including world leaders, hide their wealth through offshore tax havens. According to The Guardian, the data leak contains 11.5 million files from the database of offshore law firm Mossack Fonseca. The records were obtained from an anonymous source by the German newspaper Süddeutsche Zeitung, which shared them with the International Consortium of Investigative Journalists (ICIJ), which then passed it on to a large network of international partners, including the Guardian and the BBC.

The data reveals that 12 world leaders, 143 politicians, their families and close associates have been using offshore tax regimes. According to ICIJ, the leaks also show details of hidden financial dealings of fraudsters, drug traffickers, celebrities and billionaires, and links to global scandals.

The law firm has a network of 600 people working in 42 countries. Mossack Fonseca operates in tax havens including Switzerland, Cyprus and the British Virgin Islands, and in the British crown dependencies Guernsey, Jersey and the Isle of Man.

According to the Guardian, the leaked data includes emails, financial spreadsheets, passports and corporate documents that show the secret owners of bank accounts and companies in 21 offshore jurisdictions, including Nevada, Hong Kong and the British Virgin Islands.

2. Which World Leaders Have Been Implicated?

Russian President Vladimir Putin, has the largest amount of money implicated so far in the leaks. The accusations against him total more than $2 billion.

According to The Guardian, Putin’s best friend, cellist Sergei Roldugin, is also implicated for hiding money from Russian banks offshore.

Meanwhile, Putin’s spokesman, Dmitry Peskov, sent a statement to The Guardian saying the allegations are a “coordinated plot against Russia.”

According to The Guardian, Russia’s TV Rain was also quoted Peskov as saying: “We were expecting more impressive results from this journalistic community, they have found out little new … This kind of thing is aimed at an external audience. It’s clear that the level of Putinophobia has reached a level at which it’s impossible to speak well of Russia, and it’s required to speak ill of Russia.”

Iceland’s Prime Minister Sigmundur Davíð Gunnlaugsson was also implicated in the leaks. Opposition members of parliament have called for a snap election after the leak linked him and and his wife to offshore holdings.

Ukraine’s President Petro Poroshenko apparently set up a secret offshore company in the British Virgin Islands, registered as Prime Asset Partners Ltd., on Aug. 21, 2014. The leaks show that the president is listed as the sole shareholder.

Meanwhile, the Ukrainian general prosecutor’s office said they did not see any evidence that suggests Poroshenko committed a crime based on the leaked data a senior official for the office said on April 4.

“According to a preliminary study of the information published by some media concerning the violation of law by President Petro Poroshenko, the general prosecutor’s office does not see any elements of a crime,” Vladislav Kutsenko said.

Other world leaders include:

British Prime Minister David Cameron’s father was accused of having an offshore company exempt from tax and avoiding U.K. taxes.

When asked if the Cameron family still held an offshore fund, a spokeswoman told The Guardian, “That is a private matter. I will focus on what the government is doing.”

3. Panama Papers By The Numbers

According to the ICIJ, the data leak:

4. What Is the Significance of the Leak?

The Panama Papers is the biggest leak in history. The investigation is bigger than Wikileaks and the NSA leak by Edward Snowden. The International Consortium of Investigative Journalists said that it took a year to look through the 11.5 million files, with the help of German newspaper Suddeutsche Zeitung and more than 100 other media partners. Journalists indexed, organized, and analyzed 2.6 terabytes of data that made up the leak, working with reporters working 25 language from almost 80 countries.

5. What Is Mossack Fonseca Saying?

The Panama-based law firm released a statement to The Guardian in regards to the data leak:

“We cannot provide responses to questions that pertain to specific matters, as doing so would be a breach of our policies and legal obligation to maintain client confidentiality. However, we can confirm the parties in many of the circumstances you cite are not and have never been clients of Mossack Fonseca.

We provide company incorporation and related administrative services that are widely available and commonly used worldwide.

It is legal and common for companies to establish commercial entities in different jurisdictions for a variety of legitimate reasons, including conducting cross-border mergers and acquisitions, bankruptcies, estate planning, personal safety, restructuring and pooling of investment capital from different jurisdictions in neutral legal and tax regimes that does not benefit or disadvantage any one investor.

Our services are regulated on multiple levels, often by overlapping agencies, and we have a strong compliance record.

In addition, we have always complied with international protocols … to assure as is reasonably possible, that the companies we incorporate are not being used for tax evasion, money laundering, terrorist finance or other illicit purposes.

We are responsible members of the global financial and business community.

We conduct thorough due diligence on all new and prospective clients that often exceeds in stringency the existing rules and standards to which we and others are bound.

Many of our clients come through established and reputable law firms and financial institutions across the world, including the major correspondent banks, which are also bound by international “know your client” (KYC) protocols and their own domestic regulations and laws.

The documents you cite in your reporting show that we routinely deny services to individuals who are compromised or who fail to provide information we need in order to comply with our KYC and other obligations.

For 40 years Mossack Fonseca has operated beyond reproach in our home country and in other jurisdictions where we have operations. Our firm has never been accused or charged in connection with criminal wrongdoing.

However, we are legally and practically limited in our ability to regulate the use of companies we incorporate or to which we provide other services.

We are not involved in managing our clients’ companies. Excluding the professional fees we earn, we do not take possession or custody of clients’ money, or have anything to do with any of the direct financial aspects related to operating their businesses.

All of the jurisdictions where we have operations have made significant strides in their efforts to comply with global protocols to prevent abuse of their financial and corporate systems. This includes preventing money laundering, combatting terrorist financing and preventing tax evasion.

Most of the jurisdictions have formal tax information exchange agreements with several countries that are approved by the Organisation for Economic Cooperation and Development (OECD).

We regret any misuse of our services and actively take steps to prevent it.

We regret any misuse of companies that we incorporate or the services we provide and take steps wherever possible to uncover and stop such use. If we detect suspicious activity or misconduct, we are quick to report it to the authorities. Similarly, when authorities approach us with evidence of possible misconduct, we always cooperate fully with them.

Tax evasion and avoidance: we strongly disagree with any statement implying that the primary function of the services we provide is to facilitate tax avoidance and/or evasion.

Due diligence on clients: approximately 90% of our clientele is comprised of professional clients, such as international financial institutions as well as prominent law and accounting firms, who act as intermediaries and most of them are regulated in the jurisdiction of their business.

Most of the persons mentioned by you are not our clients nor do they appear in our database as persons related to the companies we formed. Due diligence procedures were carried out in accordance with the laws in place at the time the companies and cases you made reference to were incorporated and in existence.

A significant percentage of our clients are banking institutions, trust companies, lawyers, and accountants who are also obliged to perform due diligence on their clients.

Politically exposed persons (PEPs): we have duly established policies and procedures to identify and handle those cases where individuals either qualify as PEPs or are related to them. As per our risk based approach, PEPs are considered to be high-risk individuals. PEPs do not have to be rejected just for being so; it is just a matter of proper risk analysis and administration.

Sanctions lists and convicted criminals: our company does not foster or promote unlawful acts.

We have our own procedures in place to identify such situations, to the extent it is reasonably possible. Once these types of situations are identified, we routinely discontinue the provision of our services.

The time it takes for us to resign as registered agent from the involved companies varies depending on our internal procedures and the regulations of the respective country or jurisdiction. Sometimes the authorities require the registered agent not to file any resignation in order to prevent obstructing their investigation.

We would like to take this opportunity to clarify that we have never knowingly allowed the use of our companies by individuals having any relationship with North Korea, Zimbabwe, Syria, and other countries mentioned by you that might have been considered as a threat to any other country’s national security or that have been listed by a sanctioning body.

If for some reason, unbeknownst to us, some company formed by us ended up in the hands of people having such relations for whatever criminal or unlawful purpose, we strongly condemned that situation and took and will continue taking any measures that are reasonably available to us.

Allegations that we provide shareholders with structures supposedly designed to hide the identity of the real owners are completely unsupported and false.

We will not answer any questions related to private information regarding our company founding partners as we do not see the public interest behind said inquiries. Likewise, we will not make any reference to the statistics and other “factual” information about numbers and amounts since they are far from being accurate. In relation to our asset management company, same does not have the capacity by law to use, move, or dispose of in any way their clients’ money.

You may consider this document as our response. However, it should not be considered as a validation of the information contained therein, and especially to the method by which said information was obtained.

It appears that you have had unauthorized access to proprietary documents and information taken from our company and have presented and interpreted them out of context. We trust that you are fully aware that using information/documentation unlawfully obtained is a crime, and we will not hesitate to pursue all available criminal and civil remedies.”

“Over the last 18 months, we have reinforced our compliance department by hiring an additional 26 professionals to comply with new regulations as well as to conduct retroactive due diligence on all existing clients.

“Finally, the instances you cite in your reporting represent a fraction–less than 1%–of the approximately 300,000 companies that Mossack Fonseca has incorporated in its over 40 years in operation. This fact shows that the vast majority of our clients use companies we incorporate for legitimate uses and that our due diligence and compliance procedures are overwhelmingly successful in thwarting those who have other intentions.”

Mossack Fonseca also alerted their clients about the leak: