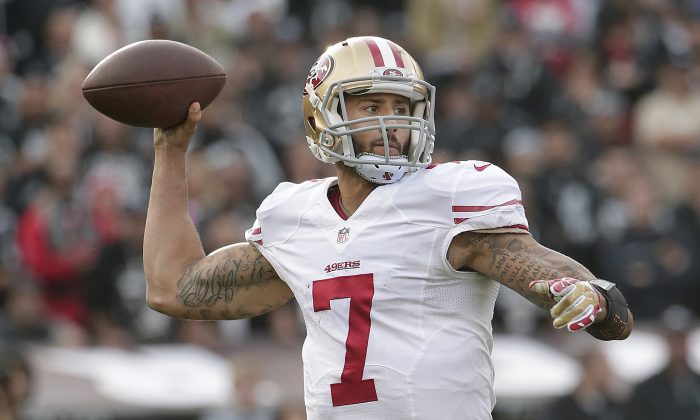 San Francisco 49ers quarterback Colin Kaepernick’s recent decision to not stand during the national anthem as a way of protesting police killings of unarmed black men has drawn support and scorn far beyond sports. The Associated Press explains how “The Star-Spangled Banner” became a ritual of American public life, its complicated racial origins and how the song has been used as a form of political resistance

National anthem as ritual of sports

The national anthem and sports first merged in the early 20th century, when “The Star-Spangled Banner” became part of baseball games. The anthem is played before the start of every U.S. major sporting event, where fans and players are expected to salute the flag by placing a hand over the heart while singing along. Not doing so is considered unpatriotic by some.

“It’s important to remember that a lot of these traditions that we take as timeless or dating back to the founders are pretty recent innovations,” said Kevin Kruse, a historian at Princeton University.

Kaepernick’s protest was the latest in a history of actions by black athletes meant to call out the discrepancies between the experiences of people of color and America’s professed ideals, said Penn State historian Crystal Sanders.

In 1968, Olympians Tommie Smith and John Carlos lifted their black-gloved fists as the national anthem was played after they won the gold and bronze medals in the men’s 200-meter sprint — a gesture seen as radical and an endorsement of black power. Boxer Muhammad Ali, celebrated as an American hero after his death in June, was arrested in 1967 after his refusal to be drafted into the U.S. Army during the Vietnam War was seen as an act of civil disobedience. Jackie Robinson, who broke the color barrier in Major League Baseball, wrote in his autobiography that he was unable to sing the national anthem or salute the flag.

Former Denver Nuggets point guard Mahmoud Abdul-Rauf was suspended by the NBA after refusing to participate in the national anthem pre-game ceremony in 1996. More recently, NBA players including Derrick Rose and LeBron James have worn T-shirts reading “I Can’t Breathe” in reference to Eric Garner, who was killed by New York City police officers in 2014. Last month, Carmelo Anthony, Chris Paul, Dwyane Wade and James opened the ESPY Awards with a message about gun violence against minorities.

“The outrage we’re seeing in light of the Kaepernick decision … is just another example of our country’s lack of a real understanding of what it means to be a person of color in the United States,” Sanders said. “Wealth, education, attire … none of that prevents us from being victims of racial discrimination.”

Kaepernick’s decision has outraged some who see his protest as offensive and un-American. It is also an unwelcome distraction for those who view sports as a way to transcend conflicts around race, gender, politics and other uncomfortable subjects in American life.

Others have come to his defense, saying his decision to sit out the national anthem and flag salute is protected as freedom of expression under the U.S. Constitution.

How ‘The Star-Spangled Banner’ was born

Watching the bombing of Fort McHenry while detained on a British ship during the War of 1812, attorney Francis Scott Key was inspired to write “The Star-Spangled Banner” as he saw the American flag flying overhead in the early morning hours of Sept. 14, 1814. The flag’s presence signaled the retreat of British ships from Baltimore’s harbor and the U.S. survival of a battle that lasted 25 hours. The showdown galvanized the young country and the flag became a symbol of determination and victory.

“The Star-Spangled Banner” was popular among the branches of the armed forces throughout the 19th century, but more than a century would pass before the song would become the national anthem. President Woodrow Wilson signed an executive order declaring it so in 1916, and Congress passed an act confirming the order in 1931 that was signed into law by President Herbert Hoover the same year.

Key supported slavery and came from a powerful plantation family in Maryland. His background may have influenced the song’s third verse, which includes the lyrics, “No refuge could save the hireling and slave/From the terror of flight or the gloom of the grave.”

These words have been interpreted as a reference to the Colonial Marines, black recruits to the British forces who fought in exchange for their freedom.

Kaepernick’s objection to saluting the flag was not related to the third verse of the national anthem, but his protest has brought fresh attention to this forgotten stanza.