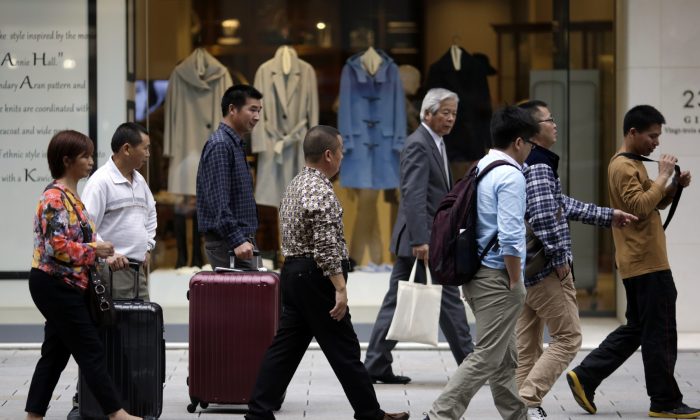 Foreign shoppers walk at a shopping district in Tokyo, Tuesday, Nov. 17, 2015. Japan, the world’s third-largest economy, is highly dependent on the health of other economies, such as the U.S. and China, to keep growth going because much of the Japanese economy is export-led. One concern is that China’s growth is gradually slowing. (AP Photo/Eugene Hoshiko)
Business & Markets

TOKYO—Here are five things to know about Japan’s ailing economy, which sank into technical recession in the third quarter, contracting at an annualized pace of 0.8 percent:

EXPORT FACTOR: Japan, the world’s third-largest economy, is highly dependent on the health of other economies, such as the U.S. and China, to keep growth going because much of the Japanese economy is export-led. One concern is that China’s growth is gradually slowing. Investors are also wary of when the U.S. Fed may raise its key interest rate. The Japanese government’s longtime effort to shift the driver of growth to domestic demand is limited because this nation’s population is aging. The government has been trying to encourage families to have children by promoting policies at companies and communities to make having and raising children easier, such as work leaves and day care.

CHEAP YEN: A big boon to exports is the cheap yen, which lifts the value of overseas earnings. The favorable currency factor has significantly helped lift the financial results of giant exporters such as Toyota Motor Corp., adding 160 billion yen ($1.3 billion) to the automaker’s operating profit for the July-September period. The dollar has been trading at about 122 yen lately, when it cost about 101 yen or 102 yen a year ago. Although the cheap yen hurts the economy in some ways by making imports more expensive in yen, including critical items like oil, overall it has given Japan Inc. a perk it’s not really even counting on.

PARIS JITTERS: The attacks in Paris last week are likely to hurt some sectors of the economy. Travel-related stocks, such as airlines and travel agencies, initially fell, although they have recovered. If fear of travel persists, it could deter tourism to Japan, which has been one booming area of the economy. The government has been aggressive in promoting a “cool” Japan, such as “manga” cartoons, sushi and other exotic food, as well as traditional crafts. Tourism traffic hit a record last year at 13.4 million people and has already topped last year’s sum with nearly 15 million arriving by the end of September.

ABENOMICS: Prime Minister Shinzo Abe is pushing his so-called “Abenomics” program, based on stopping deflation and loosening old-style regulations that have discouraged new and foreign businesses. In the area of public spending the government is expected to announce a spending package soon. Although critics say Abenomics has not helped the poor, Abe is credited with venturing forth with new measures, such as lowering corporate taxes, to wrest the economy out of decades of stagnation.

GOING SHOPPING: One good sign in this week’s data on the gross domestic product, or GDP, the total value of a nation’s goods and services, is that consumer spending remains relatively strong. Angus Nicholson, market analyst at IG in Melbourne, Australia, called that a “bright spot” in the report. Masayuki Ichikawa, economist at Bank of America Merrill Lynch in Tokyo, says the contraction figure came largely because of inventory adjustments. He doesn’t categorize Japan’s technical recession as a real recession, and expects the economy to expand in the October-December quarter.