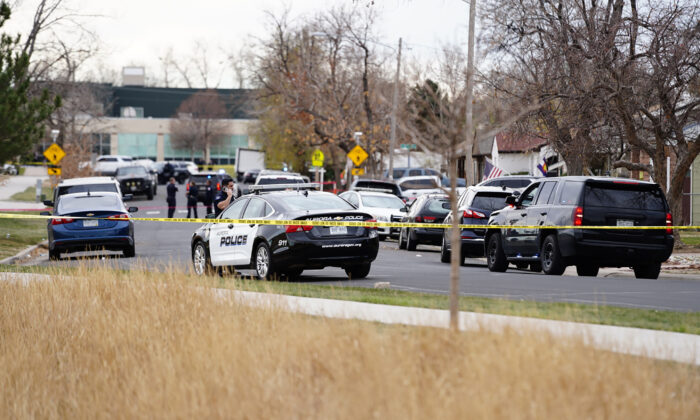 Law enforcement officials survey the scene of a shooting in which six teenagers were injured in a park, in Aurora, Colo., on Nov. 15, 2021. (Philip B. Poston/Sentinel Colorado via AP)
Crime and Incidents

Six teenagers were hospitalized after several people were shot at a park near a high school in Aurora, Colorado, officials said. All were expected to survive.

The victims, who range in age from 14 to 18, are all students at Aurora Central High School, Aurora police chief Vanessa Wilson said.

Multiple rounds of different calibers were found at the scene, and it is possible some rounds were fired by someone on foot, she said. The suspects in the shooting were at large, she said.

Three patients from the shooting were taken to Children’s Hospital Colorado in Aurora, a diverse city east of Denver. They were in stable condition and have all been reunited with their families, spokesperson Caitlin Jenney said.

The school district that manages the Aurora Central High School canceled classes for the remainder of the day, according to the department.

Additional information was not immediately made available.

The shooting took place just three miles from the Aurora movie theater where a mass shooting in 2012 left 12 dead and dozens injured. Shooter James Holmes, now 33, was sentenced to 12 consecutive life sentences plus 3,318 years without parole during a 2015 trial after he pleaded not guilty by reason of insanity, which was accepted.