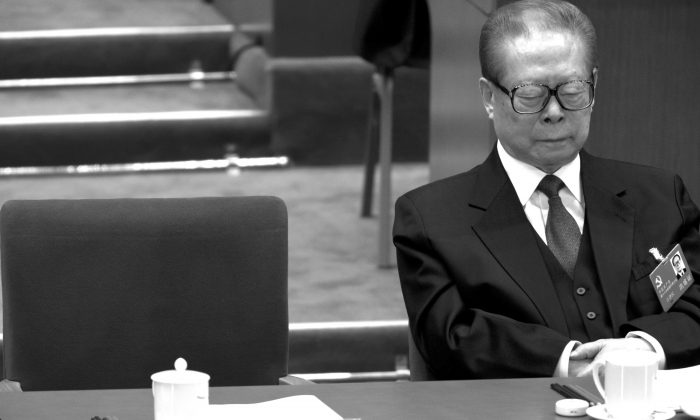 Power struggles in the Chinese Communist Party are never actually acknowledged by the Party. But they often play out in full view of the public, for those with the eyes to see.

Before the Tiananmen Square massacre in 1989, for example, two factions battled furiously, all the while denying it to the public. The gift by an aide to then-General Secretary Zhao Ziyang of a VHS television program given to the late Singaporean leader Lee Kuan Yew communicated Zhao’s political stance. Such coded signalling can easily be missed by outsiders. In the end the hard-liners won, and students were massacred on June 4.

A similar process is taking place at the highest levels of the Communist Party now, with Party leader Xi Jinping facing down his long-standing political rival Jiang Zemin. Jiang was the head of the Party from 1989 to 2002, but he retained a powerful influence for another decade, under the reign of Hu Jintao, through a vast network of cronies whom he had appointed.

Jiang’s political hallmark is the massive persecution of the Falun Gong spiritual practice that he launched in 1999. The discipline, a traditional Chinese cultivation practice that teaches meditation and moral principles, had attracted around 100 million adherents by the late 1990s. Jiang ordered it eliminated, using the campaign to force officials to pledge allegiance to him and consolidate his personal power.

Because the persecution has involved mass torture, executions, forced labor, and forced organ harvesting—the equivalent to an attempted religious genocide—maintaining the campaign, and not being held accountable for it, became key preoccupations for Jiang. He sought to preserve his influence over the Party far past the conclusion of his official rule.

Since coming to power in late 2012, Xi Jinping has been systematically attacking Jiang’s web of influence, wresting control of the Party back into the hands of the formal leadership. He began by targeting the top cronies of Jiang, even after they had left their official posts. These included Zhou Yongkang, the former security chief, and two major military leaders. There are now a series of indications that Xi has begun taking on Jiang Zemin himself.

Here are five such signs.

Chinese Internet users leapt onto the news immediately, asking whether “the toad” (as Jiang is called online) was being targeted by Party leaders. It was later reported that the stone had been moved inside the school’s grounds, though these reports were unconfirmed, and no photographs were provided in the Chinese press reports. Insiders said that if there were no political conflicts, it would never have been touched.

The disposition of a top official’s family and friends also says a great deal about their political clout in China. On this front, Jiang Zemin has not been doing very well over the last couple of years.

Many of Jiang’s lesser supporters in Shanghai, the southern Chinese city that for many years served as the Party godfather’s power base, have also been picked off one by one in the guise of Xi Jinping’s anti-corruption campaign.

Jiang’s son, Jiang Mianheng, also resigned unexpectedly from his post at the Shanghai Academy of Sciences early this year.

3. Challenges in the Press

On Aug. 10, state-run newspaper People’s Daily published an editorial chastising Party leaders who are unwilling to “give up exerting their influence on major issues,” and drew on the analogy of “tea going cold when the person leaves.” This was almost unanimously believed to be an attack on Jiang Zemin—the first open challenge.

A large range of other media coverage also marginalized Jiang, writing him out of a historical article on former leaders, for example.

Usually, searches for Chinese leaders are among the most censored online—but searches about criminal complaints against Jiang began popping up on Chinese search engines recently.

And a January story of his family trip to a mountain ridge on Hainan island was published, but then deleted from many news websites.

In China, when something that is politically sensitive and was previously punished is now not punished, it means it’s been allowed and de facto condoned by the authorities. The attempt by Falun Gong practitioners inside and outside China to criminally prosecute Jiang for his role in the attempted eradication of the group is a case in point: Nearly 160,000 complaints have been sent to courts and prosecuting offices in China, according to the Falun Gong clearinghouse Minghui, and relatively few arrests have been made. Authorities appear to have allowed the Falun Gong community to attempt to use the legal system against Jiang, whereas a decade ago they were imprisoned for doing so.

Whether Xi Jinping will use the bloody campaign against Falun Gong against Jiang in their political struggle remains to be seen.