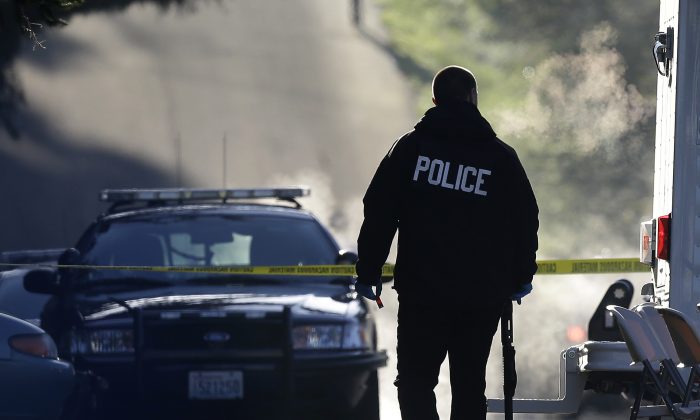 A police officer carries a shotgun and what appears to be a shell casing as officers collect evidence from the scene of an overnight shooting that left five people dead. (AP Photo/Ted S. Warren)
US

5 shot in Seattle: Five people were shot and killed on Sunday at an apartment complex south of Seattle, authorities said. The killings started a domestic violence-related killing.

The alleged gunman in the slayings was shot and killed in the incident, reported the Seattle Post-Intelligencer, citing police officials.

“When officers arrived there were still shots being fired,” Schrock was quoted as saying.

Police saw two people wounded in the parking lot and one of them reached for a gun. Officers opened fire on the man, killing him. None of the police officers were hurt in the incident.

Authorities told the Post-Intelligencer that a 28-year-old man was behind the killings before police shot him. The man killed his girlfriend before he shot and killed two men in a parking lot and another in an apartment, police said.

“We have a total of five victims and no officers were injured. There are people at the apartment complex who are providing witness statements and investigation will continue throughout the morning,” Shrock told Fox News Radio.