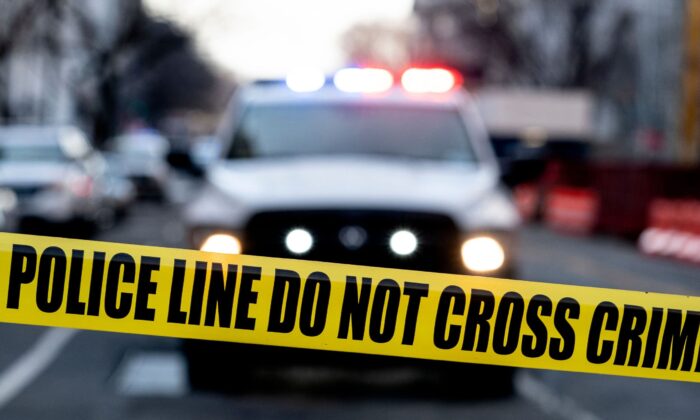 Police tape in front of a police vehicle in a file photo. (Stefani Reynolds/AFP via Getty Images)
Crime and Incidents

MOUNT VERNON, Wash.—A customer and an employee of a Walmart were shot and injured along with three young men who authorities said were involved in an altercation inside the store Sunday, police said.

The Seattle Times reported police received calls about shots being fired inside the building shortly before 10 p.m. Sunday.

Investigators believe the shooting happened after a group of men entered the store and got into an altercation with another group of men who were already in the store, police said.

Injured in the shooting were a 72-year-old customer, a 24-year-old employee and the three 19-year-old men allegedly involved in the altercation, police said. Authorities did not announce any arrests and did not know the conditions of the victims.

Three victims were taken to a hospital by emergency workers and two arrived in private vehicles, police said.

As of Monday afternoon, no arrests had been made, according to Mount Vernon police. Police said there was no sign the men entered the store to create an “active threat event.”

Maybelline Gonzalez, of Sedro-Woolley, told the newspaper she was at self-checkout when she heard two gunshots.

At first, Gonzalez, 26, thought it was the sound of something falling off a shelf as employees were restocking. Gonzalez was near the entrance and said she was able to leave the store.

Mount Vernon is about 60 miles north of Seattle.