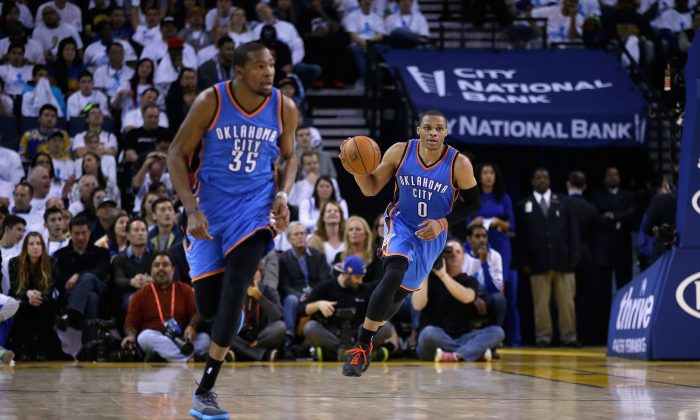 Russell Westbrook and Kevin Durant of the Oklahoma City Thunder in action against the Golden State Warriors at ORACLE Arena on January 5, 2015 in Oakland, California. (Photo by Ezra Shaw/Getty Images)
NBA

NBA Playoffs: 5 Riveting Western Conference Matchups We Could See in First Round

The 2014–15 NBA regular season is winding down, and eyes are increasingly turning toward the playoffs and potential matchups.

The Western Conference race has essentially changed from ten teams to eight thanks to the Anthony Davis injury and Goran Dragic trade, but jockeying within the top eight could produce drastically different matchups in the first round.

Some potential matchups would produce some rematches from last season—such as Oklahoma City against Memphis—but with home court advantage flipped.

Check out the most potentially engrossing matchups below.

The current No. 1–No. 8 matchup would sure be exciting to watch if the Thunder don’t overtake the Spurs for the seventh seed. Russell Westbrook has arguably been the best player in the league in February, dropping 29.5 points a game on 48 percent shooting—and adding 10.1 assists and 8.2 rebounds. The Thunder have gone 10–1 this month.

Oklahoma City became even more dangerous at the trade deadline, retooling its bench with D.J. Augustin, Enes Kanter, Steve Novak, and Kyle Singler. That’s a great backup point guard, an offensive big man, and two sharpshooters to go along with Anthony Morrow, another shooter, and Dion Waiters, who can drive and dish pretty well when he sets his mind to it.

The Warriors and Thunder series would absolutely present the cream of the crop—in the first round, no less. Westbrook and Durant against Curry and Thompson? The Thunder’s offense—still driven mostly by two players—against the Warriors’ defense? The Warriors’ team approach in contrast to the Thunder’s star approach? Awesome.

For those who can remember all the way to last season’s playoffs, the Thunder—as the No. 2 seed—faced the Grizzlies, the No. 7 seed. Those seeds could be reversed this season, with Memphis comfortably ahead of the second-tier of Western teams, and the Thunder just 2.5 games behind the Spurs.

The Thunder–Grizzlies series was remarkable, going to overtime four consecutive games—three of them wins for Memphis. Tony Allen played frenetic defense on Durant, but the star shooter still poured in bunches of points. Westbrook routinely overpowered whoever guarded him, but the Grizzlies patiently turned to their own stars—Marc Gasol, Zach Randolph, and Mike Conley—to overcome OKC in their wins.

Alas, the Thunder pulled out games 6 and 7, and went on to the next round. The new potential rematch has added intrigue because both teams’ acquisitions through trade would play prominent roles—Jeff Green for Memphis and the aforementioned bench for Oklahoma City.

These two teams have more history, as well. In the prior season’s playoffs, they met in the Western Conference Semifinals—with Memphis winning 4–1.

Mark Cuban and Daryl Morey have a healthy rivalry going, sometimes crossing the line such as when Morey inquired years ago whether Dirk Nowitzki was available for trade. And Chandler Parsons made the high-profile switch from Houston to Dallas in the offseason after the Rockets refused to match his expertly crafted offer sheet.

If the teams played each other, Parsons would face his replacement Trevor Ariza, while a Dwight Howard–Tyson Chandler matchup would be fun to watch. And who on the Mavericks would guard James Harden? Probably Rajon Rondo or maybe Parsons, and Al-Farouq Aminu part of the time.

The Rockets have a lot more pressure on them than the Mavericks. Houston hasn’t been able to make it out of the first round yet with Morey in charge, losing to the Thunder in 2013 and the Trail Blazers last season. Dallas, on the other hand, shocked many by winning the championship in 2011.

The only other compelling matchup for either team even approaching this one? A rematch between Houston and Portland.

Among a number of other possible matchups, this could be the 4–5 one this season. And it would be riveting.

A key to any series for Los Angeles is the state of their bench: Will they be able to convince any solid players to sign before the season ends, or will other contenders—such as the Cavaliers and Kendrick Perkins—keep stealing the players the Clips target?

Paul and Griffin face similar pressure to Houston in the lack of a deep playoff run much less an NBA Finals appearance on their resumes, but perhaps even more considering that Paul is set to turn 30 this year.

This No. 1–No. 8 matchup (or perhaps the No. 2–No. 7 matchup) would present a rematch of the 2013 West Semifinals. Then, the Mark Jackson-led Warriors stole game 2 in San Antonio behind Klay Thompson’s 34 points and 14 rebounds, but dropped games 3 and 6 at home to lose 4–2.

San Antonio isn’t in serious danger of missing the playoffs entirely but has looked especially weak this season, with Tim Duncan surprisingly being the only player looking similar in any way to last season. Some have blamed Tony Parker but others insist it’s not just him. “Can you point to anybody who is doing well?” Manu Ginobili said. “He’s struggling like the rest of us are struggling. It’s an ‘us’ thing. We as a team have to get it together.”

This time around, the Warriors, in the hypothetical matchup, are the stronger team, buoyed by almost unbelievable depth and a backcourt among the top, if not the best in the league. A Duncan–Andrew Bogut matchup would be thrilling, as would a Kawhi Leonard–Thompson one.