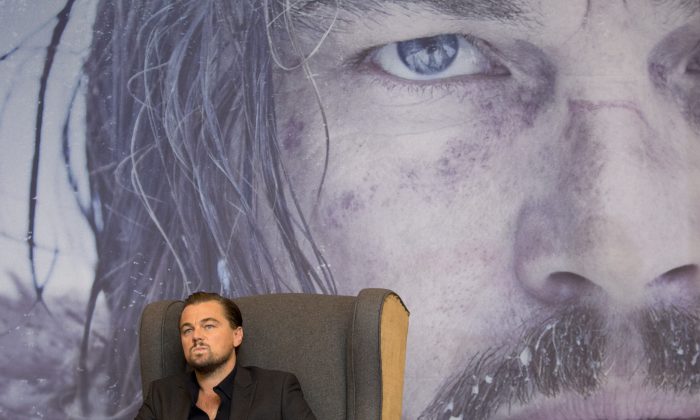 Leonardo DiCaprio at a press event to promote the Alejandro Inarritu's Oscar-nominated "The Revenant," in Mexico City, on Jan. 26, 2016. (AP Photo/Rebecca Blackwell)
Entertainment

5 Reasons Why Leonardo DiCaprio Should Win an Oscar in 2016

Leonardo DiCaprio’s been nominated for four Oscars, but hasn’t won one yet. Here’s a list of reasons why this should be his year.

Ever see the movie DiCaprio exploded onto the scene with, in 1993, as Johnny Depp’s mentally-challenged little brother Arnie?

When I saw “What’s Eating Gilbert Grape?” as an already seasoned actor, I nonetheless fell straight into civilian thinking: “Well-well! Where’d they find that mentally-challenged boy for that role? He’s so perfect—and what a shame too because he’s rather a good-looking young man!”

Arnie should have landed DiCaprio an immediate Oscar. More so than Dustin Hoffman’s “Rainman,” even. Arnie was a work of character-acting art. However, DiCaprio proved Robert Downey’s “Tropic Thunder” character’s rule about ruining your Oscar chances: “You never go full retard!” DiCaprio went “full retard,” and the result was one of the most beautiful characters to ever grace the silver screen. But no win.

And guess how he spoke to the pope? In Italian.

DiCaprio was always, first and foremost, a precocious talent. Since he’s become an iconic leading man now, it’s easy to forget that it’s almost always the prodigious talent first, combined with movie-star looks second, that adds up to a star with longevity, in the fickle world of showbusiness.

Reason #2: Law of Multiples of Seven

They say life starts when you’re 40. Actually what “they’re” talking about is the multiples-of-7 rule, which means not 40—but 42. It’s a scientific fact that all the cells in the human body undergo a complete change every 7 years. At 7, you get your adult teeth. At 14 we hit puberty. At 21 we become adults. At 28 we get married and/or have kids, or travel the world—we have some major change. Usually 35 is a crisis of some sort; illness, loss of direction, and  so on. At 42—our lives start for real. Leonardo DiCaprio will turn 42 years old in November, 2016.

Hollywood needs to Oscar-award this selfless, world-ambassador activity that DiCaprio has taken on.

In an interview with Yahoo Movies, DiCaprio said that “The Revenant” contained “30 or 40 sequences that were some of the most difficult things I’ve ever had to do.”

Like what? Like eating raw bison liver. What do you think happened next? They left all the ensuing grossness in the movie. That’s some committed non-acting, for an acting role. Of course, Nicholas Cage once ate a live cockroach onscreen, but that’s more of a case of committed as in, “should be committed to a nut-house.”

What else? DiCaprio crawled into a gutted animal carcass. Think about that. Blood and guts and nastiness in your beard. And since director Alejandro Gonzalez Iñarritu’s a perfectionist, like all great artists, you just know there were many, many takes of crawling in there, and back out again. In the freezing cold. DiCaprio should get an Oscar just for crawling in there.

DiCaprio takes his mega-star influence very seriously. He stands up for climate change; he spoke with Al Gore at the massive “Live Earth” concert.

There have been 13 popes named Leo, but Leo the movie-star talked to the current pope, because this current pope is cool that way, and cares about climate change just as much as Leo. And guess how Leo spoke to the pope? In Italian. Does using your privilege for good get any cooler than that?

Hollywood needs to Oscar-award this selfless, world-ambassador activity that DiCaprio has taken on, on our behalf, so that we don’t end up leaving a scorched earth behind for our children.